China’s economy is paying the price for the nation’s COVID Zero policy, with industrial output and consumer spending sliding to the worst levels since the pandemic began and analysts warning of no quick recovery.

Industrial output unexpectedly fell 2.9 per cent in April from a year ago, while retail sales contracted 11.1 per cent in the period, weaker than a projected 6.6 per cent drop. The unemployment rate climbed to 6.1 per cent and the youth jobless rate hit a record. Investors responded by selling everything from Chinese shares to US index futures and oil. 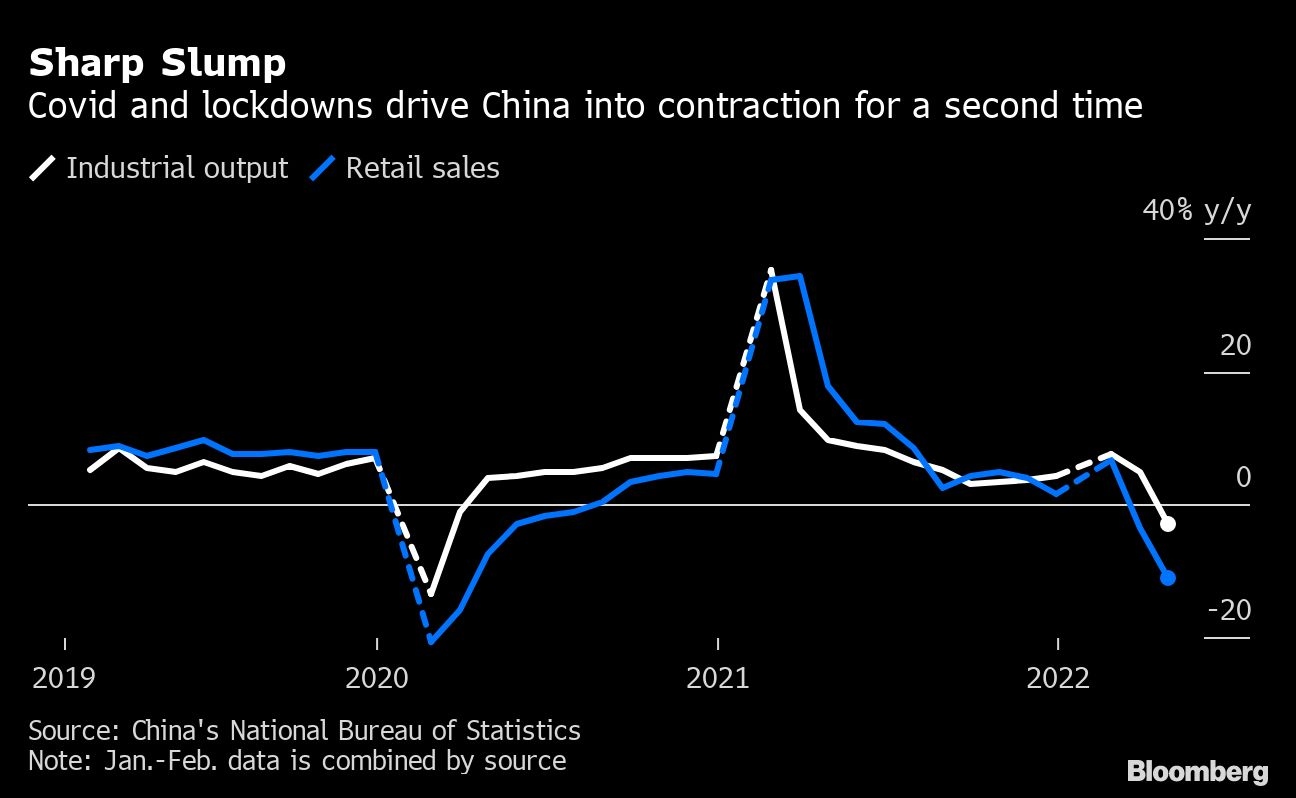 China’s economy has taken an enormous hit from the government’s stringent efforts to keep the virus at bay, with major cities like Shanghai locked down for several weeks and restrictions in many other places cutting into spending, shutting factories and blocking supply chains.

The government has doubled down on its COVID Zero strategy, even though the high transmissibility of the omicron variant puts cities at greater risk of repeatedly locking down and reopening. The zero-tolerance approach has prompted criticism from businesses, fueled public frustration and has put Beijing’s ambitious full-year growth target of around 5.5 per cent further out of reach.

China’s main financial newspapers on Monday published a six-month-old speech by President Xi Jinping on the need to preserve jobs and shore up growth, a sign of greater urgency to bolster the economy. The surge in joblessness is of particular worry to the Communist Party ahead of a twice-a-decade leadership reshuffle later this year, when Xi is expected to secure a precedent-breaking third term. 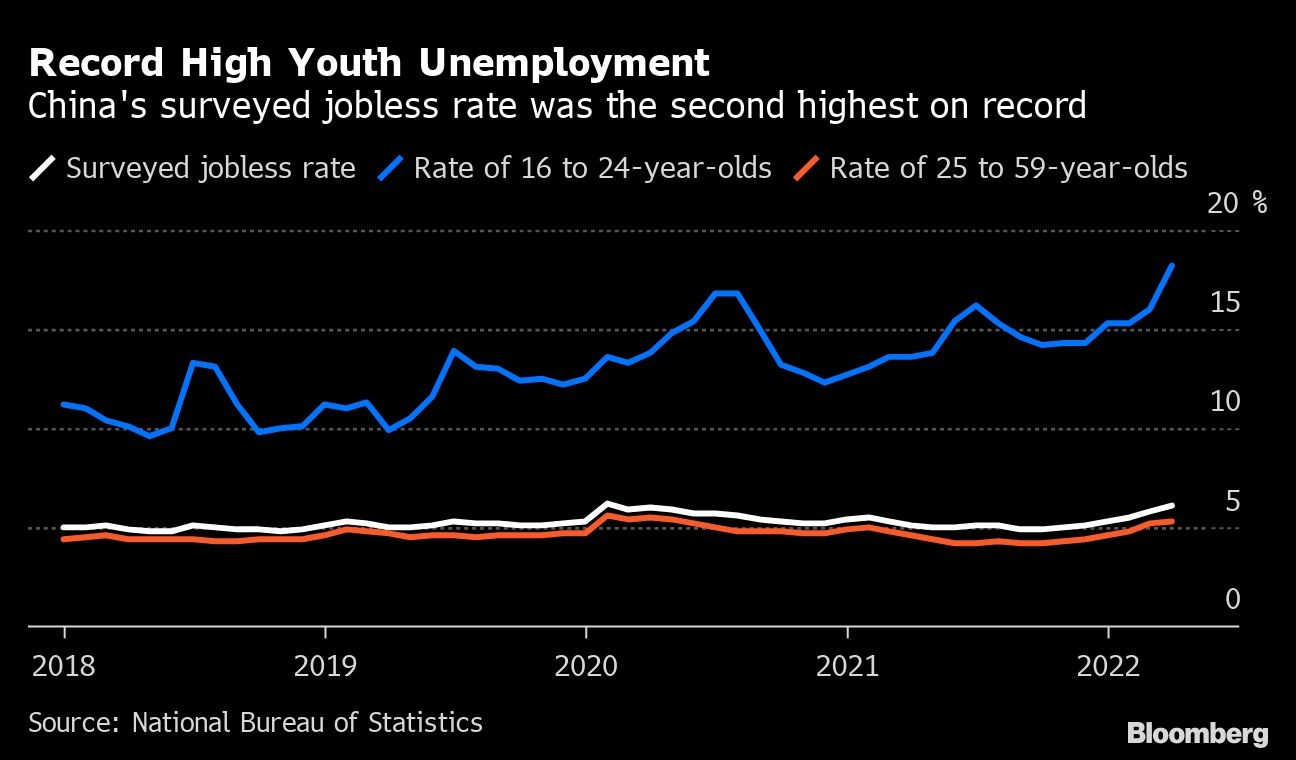 “They prioritized zero-COVID over economic growth in April, but they want both for the whole year,” said Larry Hu, head of China economics at Macquarie Group. “After all, zero-COVID at the cost of surging unemployment is a hard sell politically, especially in such a year with significant political importance.”

Monday’s data suggests gross domestic product declined 0.68 per cent in April from a year ago, the first contraction since February 2020, according to estimates from Bloomberg Economics. Growth could weaken to below 2 per cent in the second quarter, according to UBS Group AG, while S&P Global Ratings predicted it could be as low as 0.5 per cent. Citigroup Inc. economists downgraded their full-year growth forecast for 2022 to 4.2 per cent from 5.1 per cent.

With Shanghai taking the first steps toward reopening by allowing some shops to gradually resume operations from Monday, there’s optimism that last month’s data could mark the worst of the slump. However, many people still remain confined to their homes under strict lockdown measures in Shanghai and the city’s vice mayor said Sunday normal life and production will only fully resume by mid- to late-June.

China’s benchmark CSI 300 stock index closed 0.8 per cent lower with healthcare and consumer staples shares being the worst performers. The onshore yuan weakened 0.1 per cent to 6.7957 per dollar as of 5:04 pm local time while the yield on 10-year government bonds was little changed at 2.82 per cent.

Disruptions in China, the world’s factory, are worsening the global growth outlook and complicating the inflation picture. Supply chain snags have affected companies from Tesla Inc. to Apple Inc, while export growth slowed last month to the weakest pace since June 2020, as operations at the world’s largest port in Shanghai took a knock.

“It looks like you will see some kind of solution to the supply chain issues in China over the next few weeks,” he said in an interview on Bloomberg TV. “And Shanghai reopening is definitely one important factor that we are looking at as well. So yes, there are going to be a lot of challenges for the rest of the world, but looks like the worst is behind us.”

“China’s April activity data laid bare the damage from COVID lockdowns in Shanghai and other parts of the country. The impact was much wider and deeper than expected.”

“The data point to a deeper slowdown this year than expected.”

Beijing has signaled that policy makers will step up support for the economy, with Premier Li Keqiang recently urging officials to ensure stability through fiscal and monetary policy.

The People’s Bank of China took steps on Sunday to ease a housing crunch by reducing mortgage rates for first-time homebuyers. However, it left the interest rate on one-year policy loans unchanged on Monday, as inflation pressure and worries about capital outflows reduce the scope for more easing.

“It is clear that the impact of lockdowns, or the fear of lockdowns, overwhelmed any economic easing, and the Shanghai lockdown had ripple effects across the nation,” said Wei Yao, head of research for Asia Pacific and chief economist at Societe Generale SA. If the surge in unemployment “does not raise the urgency of adjusting the zero-COVID measures to allow the economy to normalize, we don’t know what will,” she said.

The National Bureau of Statistics said the COVID outbreaks had a “big impact” on the economy in April, but the effects are likely to be short-lived. “With progress in COVID controls and policies to stabilize the economy taking effect, the economy is likely to recover gradually,” it said, adding that it doesn’t expect GDP to contract in the second quarter.

Fixed-asset investment remained a bright spot, increasing 6.8 per cent in the first four months of the year, likely supported by the government’s push to expand infrastructure spending. However, the figure didn’t stack up against monthly data showing a plunge in manufacturing and materials used in construction -- cement output was down 18.9 per cent in April; production of crude steel and steel products both dropped more than 5 per cent; the production of cars plunged 44 per cent; and total manufacturing output dropped 4.6 per cent.

Electricity generation fell 4.3 per cent in April from a year ago, as power demand from factory floors to steel mills and shopping malls waned amid the virus restrictions.

Monetary stimulus is proving less effective in the face of COVID lockdowns, with data on Friday showing businesses and consumers had little appetite to borrow in April. Credit growth weakened sharply last month, with new yuan loans sinking to the lowest level since December 2017.

Despite the PBOC’s unchanged stance on policy rates, banks could cut their main lending rates on Friday, which would help to further lower mortgage rates for homebuyers. However, economists say the impact will be fairly limited. 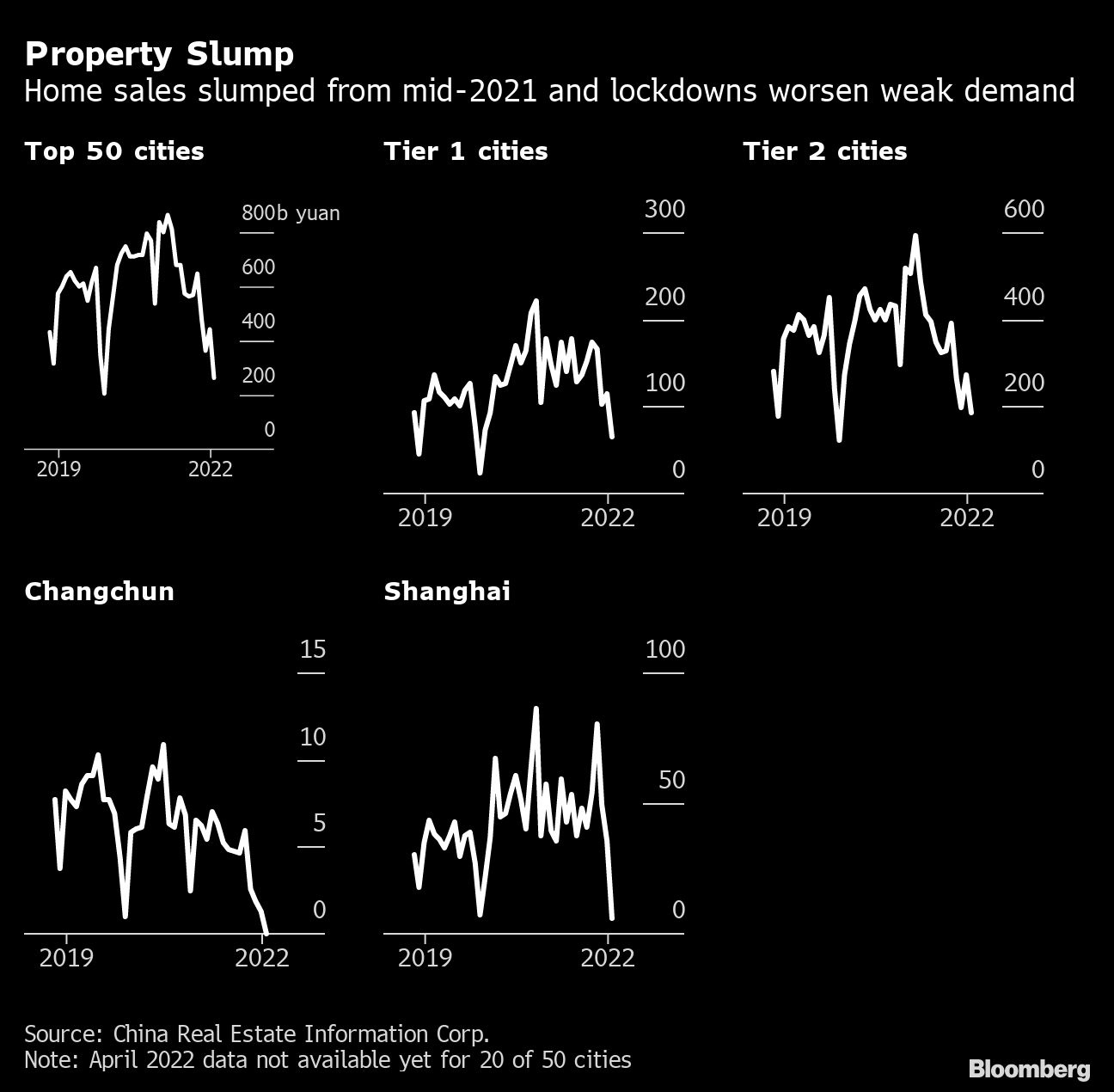 China’s housing market is a crucial source of growth for the domestic economy but has been in a slump for almost a year, with sales dropping at a double-digit pace every month since August 2021 and prices of new homes also falling after a government crackdown on indebted property developers.

Investment in property development fell 2.7 per cent in the first four months of the year, while the value of homes sales dropped 32 per cent, the data showed.

“The biggest problem that we currently see is the continued current pressure on credit, and to the extent that the business confidence is being shaken, and therefore credit demand is now fundamentally being damaged,” Helen Qiao, economist for Greater China at Bank of America, said in an interview on Bloomberg TV. “And therefore it takes more than just a simple interest rate cut to boost the credit demand.”