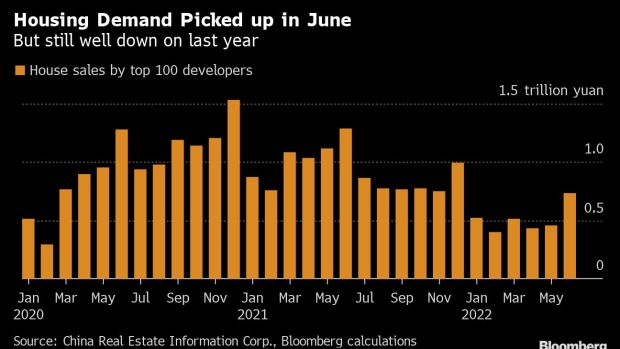 Unfinished apartment buildings at the construction site of a China Evergrande Group development in Beijing, China, on Thursday, Jan. 6, 2021. Evergrande is seeking to delay an option for investors to demand early repayment on one of its yuan-denominated bonds, in the latest sign of distress amid a broader real estate debt crisis. Photographer: Andrea Verdelli/Bloomberg , Bloomberg

(Bloomberg) -- China’s real estate slump is probably past its worst -- but the market remains a long way from a full recovery.

Industry executives and economists foresee sales remaining depressed due a weak job market, a prolonged cash crunch and low confidence on housing prices. It could hit growth in the world’s second-largest economy, where real estate and related industries account for about 20% of gross domestic product.

Sales at China’s largest housing developers fell 43% in June from a year earlier, according to China Real Estate Information Corp., less than the previous month’s 59% decline. Weekly sales data from CRIC show that some major cities, including Shenzhen and Guangzhou in southern China, generated year-on-year growth at the end of June.

The market has “bottomed out” but a recovery will be slow, Yu Liang head of China’s second-largest builder China Vanke Co., said last week. He attributed the recovery partly to seasonal factors -- property developers usually rush sales in June to polish interim results.

The easing of Covid restrictions has helped. CRIC data show sales by top developers were up 61% in June from May. Still, that was less than half the pace of increase following the lifting of 2020’s lockdowns.

Such data suggest “a mild recovery, rather than the V-shaped rebound in 2020,” Barclays’ Hong Kong-based credit analyst Wilson Ho wrote in a Monday note. Sales in smaller cities are weaker compared with larger ones, he added. That’s prompted developers in some rural areas to accept garlic, wheat and even watermelon as housing deposits in recent months.

Housing sales have fallen year-on-year for 11 successive months, according to official data, making this the longest slump since China created a private property market in the late 1990s. Some economists expect sales to turn positive in the final quarter of the year, partly because performance late last year was so weak.

That said, the sector still faces significant challenges. Luxury builder Shimao Group Holdings Ltd.’s default on a $1 billion offshore bond this week highlighted the severity of the spreading liquidity crisis. It could also leave millions of square feet of apartments unfinished -- underscoring a risk that has deterred homebuyers. Developers’ completion for property projects slumped further in May, according to official data.

Chinese builders have been driving record offshore bond defaults this year, and the risks are now spilling into the onshore market. The nation’s economic recovery remains uncertain due to risks from lockdowns.

“The road to the property sector recovery will likely be quite bumpy as Beijing remains determined to eliminate the highly infectious omicron variant,” economists at Nomura Holdings Inc. wrote in a note.

China still has some options to boost the market -- mortgage rates remain higher than levels seen after previous downturns. But officials have indicated they will stick to their policy of not using real estate for economic stimulus.

For the full year, Moody’s Corp. and S&P Global Inc. both predict a drop of 15% or more.

“Limiting the drop of real estate industry to between 10% and 20% would be difficult,” Feng Jun, a former housing ministry official who is now head of the state-backed China Real Estate Association, warned during a June 29 conference in Beijing.