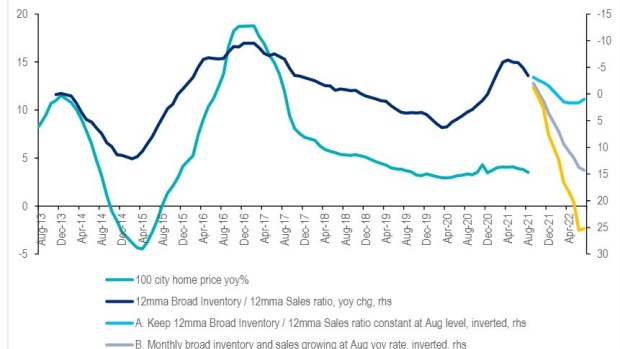 (Bloomberg) -- China’s home prices are at risk of “meaningful downside” regardless of what happens to China Evergrande Group, according to Citigroup Inc. analysts, in what would be a further drag on the country’s economic growth.

“It seems clear that even in an orderly restructuring, the property sector in China is likely to face downside pressures,” wrote analysts including Dirk Willer in a note dated Thursday. “While authorities try to limit lower real estate prices due to fire sales by Evergrande by implementing price floors, price controls typically do not work.” The note was titled “A Bear Market in Chinese Property.”

Evergrande, the world’s most indebted developer, has yet to say whether it paid interest due Thursday to holders of its dollar bonds. The company will then have a 30-day grace period to make the payment before a technical default may be declared. Financial regulators in Beijing have encouraged Evergrande to take all measures possible to avoid a near-term default on dollar bonds, though investors are pricing in a debt restructuring.

Slowing China’s housing market is one of the many campaigns being waged by President Xi Jinping as he seeks to reduce the cost of raising a family and cut leverage in the financial system. Yet it’s also one of the toughest goals to achieve given the vital importance of the sector to the economy -- the industry accounts for almost 30% of gross domestic output and 40% of household assets.

Data this month showed home sales by value dropped 20% in August, while prices in the secondary market dropped for the first time since February 2020.

Concern is growing that the impact of such policies spiral out of control. China needs to ease pressure on indebted developers before the pain inflicted on Evergrande spreads too far and undermines the economy, Bank of America Corp. economists said earlier this month. Nomura Holdings Inc. sees property curbs accounting for more than half of China’s growth slowdown in the second half.

While Beijing has multiple options to support property if needed -- and some analysts say it’s too early to reverse course -- Citigroup says previous policies like loosening restrictions on second-home buyers may not be effective. That’s because of weaker demand and a more saturated market -- in other words, plenty of people already have multiple homes and won’t want another.

The fallout would be most pronounced in global commodity markets, as well as emerging-world credit and currencies, according to Citigroup’s simulation based on China’s last severe property downturn in 2014.

“We fear that the China slowdown will eventually have an impact on commodities, which are a key economic driver for many EM economies,” wrote the Citigroup analysts.