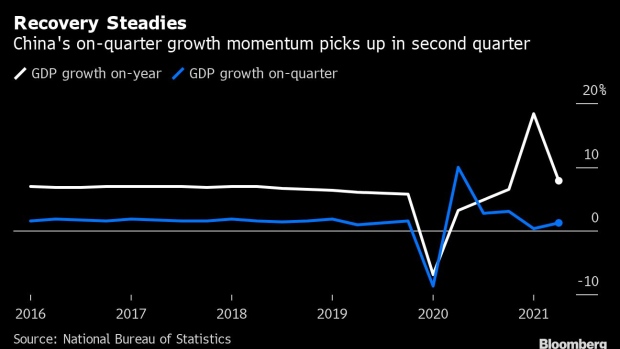 (Bloomberg) -- Beijing pledged more effective fiscal support for the world’s second-largest economy and tighter supervision of overseas share listings as policy makers highlighted economic risks in the second half of the year.

At a meeting chaired by President Xi Jinping, the Communist Party’s Politburo reiterated that monetary policy will keep liquidity reasonable and sufficient, according to a report in the state-run Xinhua News Agency. It also pledged support for small businesses and industries struggling to recover.

The Politburo described the external environment as “becoming even more complicated and grim” as the global pandemic continues to develop, according to Xinhua.

The July meeting of the 25-member Politburo is typically when they review the economy’s performance in the first half and set policy priorities for the rest of the year. It’s taken on heightened significance this time around after authorities roiled financial markets with a spate of regulatory overhauls that tightened the state’s grip on industries from private education to technology and property.

The Xinhua report didn’t elaborate on what measures would be taken to improve the supervision system for overseas share listings.

The meeting also for the first time vowed to strengthen “cross-cyclical adjustment” to macro policies, a phrase that was previously used by Premier Li Keqiang earlier this month during an economic forum. Some analysts have said the comments mean authorities will take a longer time frame when considering policy support and avoid overstimulating the economy.

The Politburo said it will coordinate policies this year and next year to make sure the economy operates in a reasonable range. It also vowed to stabilize commodity prices and supplies and urged stability in housing prices.