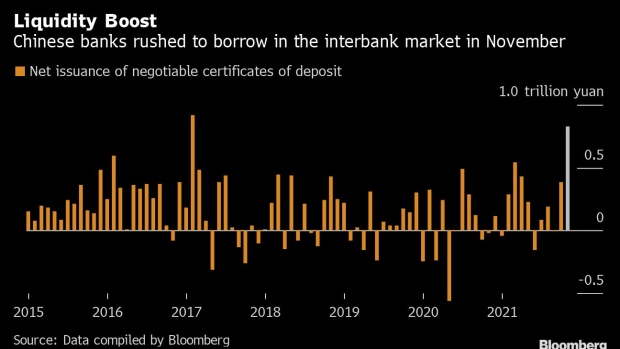 (Bloomberg) -- Chinese banks are rushing to raise short-term debt through negotiable certificates of deposit traded in the interbank market, foreshadowing a boost in lending as the economy slows.

Commercial lenders have issued a net total of almost 831 billion yuan ($130 billion) of NCDs in November, the highest since February 2017, data compiled by Bloomberg shows. This could indicate banks are preparing to accelerate loans to customers after the People’s Bank of China encouraged lenders to step up credit support to the economy and relaxed some restrictions on property financing.

“Banks’ liabilities have been tight throughout this year, so they must increase liabilities first when they plan to grant more loans,” said Tan Songheng, a fixed-income manager at the Bank of Sanxiang Co. Ltd.

NCDs have become a major way for banks to replenish liquidity since they were first launched in 2013. It’s gained popularity this year because the coupon on one-year NCDs has generally remained below the interest rate on the one-year medium-term lending facility offered by the PBOC.

Credit growth showed signs of stabilization in October after months of slowing. In its latest monetary policy report, the PBOC signaled stronger lending support in coming months by dropping the phrase that it would seek to “control the valve on money supply.” It also guided banks to keep mortgage lending and loans to developers steady to prevent the property downturn from worsening.

The PBOC has chosen to either fully or partially roll over maturing medium-term policy loans this year, while keeping interbank liquidity ample through flexible injections of short-term funding during its open-market operations. Despite the economic slowdown, many economists expect the PBOC to refrain from broad-based monetary easing and instead use structural tools to increase lending to sectors including green projects.

Banks are likely to continue issuing more NCDs as there’s a greater demand for liquidity to increase lending, according to Li Yong, an analyst at Soochow Securities Co. Ltd. Tan of Bank of Sanxiang expects new loans to pick up significantly in November and December from the same period last year.