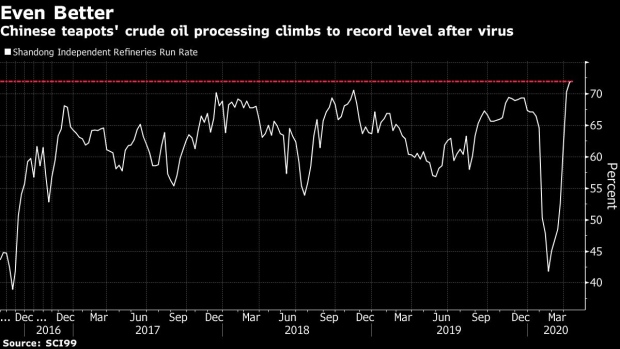 Chinese refiners are snapping up low-price oil from all over the world as Asia’s largest economy emerges from a virus-driven slump.

Varieties such as Alaska North Slope, Canada’s Cold Lake and Brazil’s Lula have been offered at steep discounts to global benchmark prices over the past week as sellers scrambled to secure buyers. Processors in China -- where throughput is back to pre-virus levels -- are snagging many of the bargains as much of the rest of the world remains in lockdown.

Spot supplies of Cold Lake were sold by a European trader at a discount of between $8 and $9 a barrel to Brent on a delivered basis, while an oil major sold a shipment comprising Alaskan North Slope and Brazilian grades at a $5.50 to $6 discount, said traders who buy and sell crude in Asia. The cargoes were purchased by Chinese independent refiners, known as teapots, which have staged a strong comeback from run-rate cuts and closures in February.

As for oil that’s produced closer to Asia, Chinese state-owned refiners have been buying Russia’s Sokol crude for significantly less than Dubai benchmark prices. The spot purchases were made on top of crude bought via long-term supply contracts with Saudi Arabian, Iraqi and Kuwaiti producers. At least five Chinese processors sought full contracted volumes from Saudi Aramco this week after it slashed official prices for Asian customers for a second month.

Major producers are still struggling with a large overhang of physical cargoes despite the agreement this month by OPEC and its allies to curb output by almost 10%. Meanwhile, storage -- both on land and at sea -- is rapidly filling up. Brent crude has remained in a steep contango, a bearish market structure where prompt oil is cheaper than later supplies, even after the OPEC+ deal.