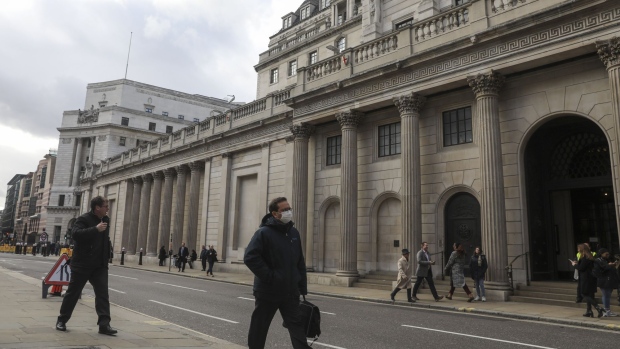 A pedestrian wearing a protective face mask walks past the the Bank of England, in the City of London, U.K., on Tuesday, March 3, 2020. Andrew Bailey's tenure as BOE Governor starts when concerns about the coronavirus have sparked a flurry of speculation that central banks around the world will start emergency policy easing. Photographer: Simon Dawson/Bloomberg , Bloomberg

The economic impact from the coronavirus outbreak risks becoming entrenched and some businesses are describing the situation as being worse than the 2008 financial crisis, according to the Bank of England.

“There is a risk of longer-term damage to the economy, especially if there are business failures on a large scale or significant increases in unemployment,” officials said in minutes of their policy meeting published Thursday. “The economic consequences of these developments are becoming more apparent and a very sharp reduction in activity is likely.”

Officials said that while the measures they have taken so far helped stabilize markets and improve liquidity, they stand ready to provide further stimulus if needed. They voted unanimously to keep interest rates and their bond-buying program unchanged, after loosening policy considerably in the last few weeks due to the shock from the coronavirus outbreak. 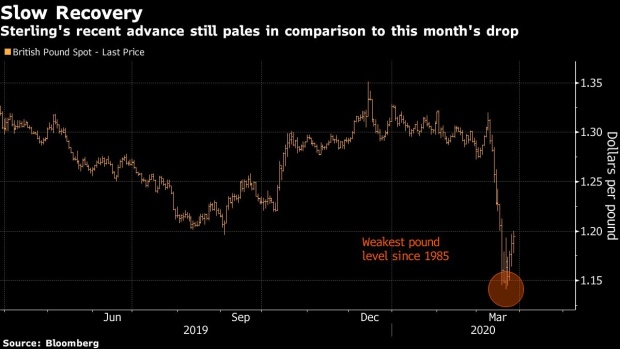 “If needed, the MPC can expand asset purchases further,” policy makers said. The bank “will continue to monitor the situation closely and, consistent with its remit, stands ready to respond further as necessary to guard against an unwarranted tightening in financial conditions, and support the economy.”The benchmark interest rate was left at a record-low 0.1 per cent, after officials cut from 0.75 per cent at two emergency meetings this month. At the second meeting, on March 19, officials also said they will buy 200 billion pounds (US$239 billion) of bonds. There wasn’t a strong case for further changes in policy at this week’s meeting, the BOE said.

The pound was little changed after the announcement and was trading at US$1.19 as of 12:30 p.m. in London.

The coronavirus outbreak has shuttered large parts of the economy and led to widespread predictions of a deep U.K. recession. The BOE has also started a new program to provide easy and cheap credit for business, and worked with peers around the world to set up new dollar swap lines with the Federal Reserve.Meanwhile the Treasury announced the central bank would help provide funding to businesses by purchasing commercial paper in an unlimited program. Governor Andrew Bailey, who began the job just last week, said the latter step increased the amount of policy space available to the BOE.

The BOE also published a summary of intelligence from its network of agents across the U.K. They reported ‘a sudden, rapid decline in economic activity in recent weeks,” and noted that “the situation has been described by many Agency contacts as being worse than the financial crisis in 2008.”

Still, in more positive news, the agents said that government’s response to the crisis -- including a pledge to pay a portion of citizens’ wages if they job was at risk -- is saving some from unemployment.

“Very early reports from several companies suggested that the scheme would save jobs that might otherwise have been lost,” the BOE said.