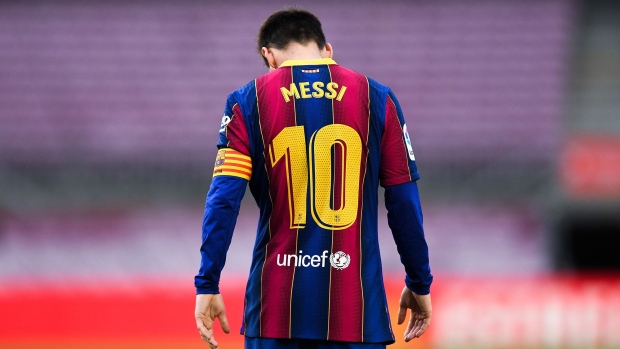 Lionel Messi of FC Barcelona shows his dejection during the La Liga Santander match between FC Barcelona and RC Celta at Camp Nou on May 16, 2021 in Barcelona, Spain. , Photographer: David Ramos/Getty Images Europe

Europe’s top soccer clubs spent less during the summer transfer window as the pandemic continued to hit their finances, even as the sport’s two most prominent players switched team.

The English Premier League, the continent’s richest competition, paid out a gross 1.1 billion pounds (US$1.5 billion) in the trading period that closed on Aug. 31, according to Deloitte’s Sports Business Group. That was the lowest since 2015 and was the first time there was a consecutive decline since the global financial crisis.

The German Bundesliga was the only league among the top five to increase spending. That was despite Barcelona star Lionel Messi’s transfer to Paris Saint-Germain and Cristiano Ronaldo’s surprise return to Manchester United after he was sold by Italian club Juventus.

“Club spending records have been broken, player moves -- including the two greatest players in a generation -- have grabbed the headlines,” said Dan Jones, partner in Deloitte’s Sports Business Group. “Perhaps most remarkable is that all this has been achieved with lower spending than we have seen in the previous two summers.”

Premier League clubs led the way, with Arsenal, Manchester United, Manchester City and Chelsea being the top four-biggest gross spenders. But the league’s teams as a whole reined in spending as a proportion of estimated revenue, with this falling to 10 per cent from 18 per cent, Deloitte said.

The volume of free transfers rose, though so did the number of the highest-value deals, such as the 100 million pounds Manchester City paid Aston Villa for England attacking midfielder Jack Grealish.

Italy’s Serie A was the next highest-spending league, though with clubs paying less than half the amount of the Premier League.