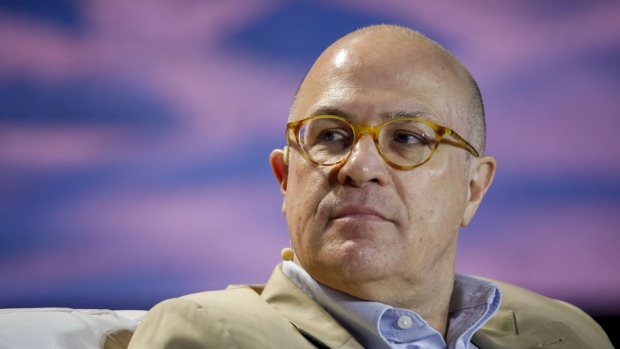 Christopher Giancarlo, the former chairman of the U.S. Commodity Futures Trading Commission, listens during the Bitcoin 2021 conference in Miami, Florida, U.S., on Friday, June 4, 2021. The biggest Bitcoin event in the world brings a sold-out crowd of 12,000 attendees and thousands more to Miami for a two-day conference. , Bloomberg

(Bloomberg) -- Just months after settling a probe with a key US regulator, crypto betting platform Polymarket has signed up the former head of that agency as the new chairman of its advisory board.

J. Christopher Giancarlo led the Commodity Futures Trading Commission during the Trump administration and is known for his early embrace of crypto and blockchain. The 63-year-old received the ‘CryptoDad’ moniker after a US congressional appearance and even authored a book with that name about the fight for the future of money.

“I’ve spent a lifetime at the junction of financial markets, technology, law and regulation,” Giancarlo said. “Polymarket was pursued by the CFTC, they reached the settlement, they paid the price, moved everything offshore, and they’re doing what is required of them. I’m very proud to now help advise them on where to go from here on out.”

Back in January, the online platform that offers wagers on politics, economic indicators and other real-world events, was told to wind down its existing contracts and agreed to pay $1.4 million to resolve allegations it offered illegal trading, according to the CFTC. Polymarket, whose popularity surged during the pandemic, had been running an unregistered platform that let people bet on the outcome of events since around June 2020, the agency said at the time.

Polymarket didn’t admit or deny wrongdoing in the settlement. The company introduced new contracts weeks after the settlement, but US residents are not able to trade on the site.

The predictions platform is led by 23-year-old founder Shayne Coplan, and lets users trade on the outcome of topics like the expansion of NATO, the Republican winner in the Pennsylvania senate primary, and whether Amber Heard will be held liable for defaming Johnny Depp. Instead of US dollars, customers who want to make trades on Polymarket use USD Coin (USDC), a stablecoin issued by Circle.