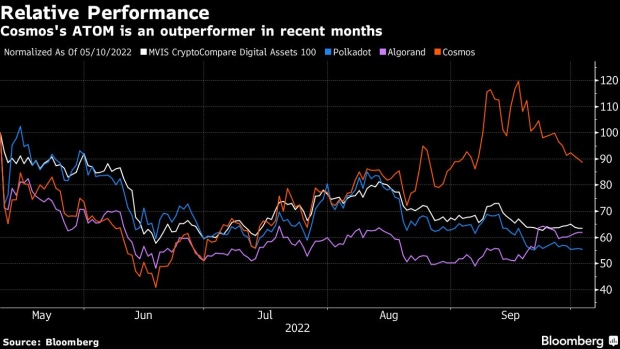 A digital screen displays the prices of cryptocurrencies Ethereum, clockwise from top left, Solana, Cardano, Polkadot, to U.S. dollar in Hong Kong, China, on Thursday, Feb. 10, 2022. Employees all over the world are opting to get paid in cryptocurrencies, though they're still in a small minority, according to global payrolls and hiring company Deel. Photographer: Paul Yeung/Bloomberg , Bloomberg

(Bloomberg) -- Modular Asset Management’s crypto hedge fund has been buying tokens like Algorand and Polkadot in a bet that coins with stronger sustainability characteristics will outperform after a $2 trillion shakeout in digital assets.

The Modular Blockchain Fund, launched in May, has also stepped up purchases of Cosmos in recent weeks, Chief Investment Officer Daniel Liebau said in an interview.

Liebau is seeking to gain an edge in choppy markets by picking coins he believes will better withstand rising scrutiny of the environmental, social and governance characteristics of crypto — a trend that’s taken hold in other asset classes like stocks and bonds over the past decade.

So far, Liebau’s picks have had a mixed performance. Polkadot and Algorand have dropped 43% and 39%, respectively, since Liebau’s fund was launched on May 10, compared with a 34% decline in the MVIS CryptoCompare Digital Assets 100 Index. Cosmos has performed better, slipping about 6%.

While the energy demands of Bitcoin mining have long been a point of contention, this year’s market carnage has brought attention to other aspects of ESG where crypto is lagging far behind.

The collapse of the TerraUSD stablecoin in May has triggered investigations in the US and South Korea, and its creator is being sought by Korean authorities. Several digital-asset lenders have frozen deposits and gone bankrupt, and a prominent crypto hedge fund is being liquidated, prompting a spate of lawsuits and allegations of fraud. And cryptoasset applications that had touted their role in making finance more fair and equal have descended into infighting over governance.

Modular, which manages about $1 billion, was spun out of Izzy Englander’s Millennium Management in January 2020. Liebau has been working with the firm since mid-2021 to develop an ESG-focused blockchain strategy. He declined to disclose the strategy’s assets under management. From its inception through the end of August, the Modular Blockchain Fund outperformed Bitcoin by 7.3 percentage points, according to Liebau. It beat the MVIS CryptoCompare Digital Assets 100 Index by 4.8 percentage points over the same period. The fund doesn’t take short positions.

Modular is “capitalizing on the trend where crypto is being included in asset allocation and ESG integration frameworks,” said Bloomberg Intelligence analyst Jamie Douglas Coutts.

Liebau said his fund studies some 25 ESG metrics of the underlying blockchain or smart-contract platform when deciding whether to buy a token. They include energy consumption, changes in the wealth distribution among wallets and the composition of validators on the network. Validators help to order transactions on a blockchain to ensure it runs smoothly, typically in exchange for a fee paid in the protocol’s native token.

The fund currently holds about a dozen tokens, Liebau said. It’s overweight Polkadot, whose blockchain uses sharding, a scaling solution the lowers the cost of bundled transactions. Other blockchains like Ethereum are also implementing sharding.

Liebau said he invested in Algorand because of what he says is its secure and energy efficient consensus mechanism. Algorand network nodes can run on relatively basic computers, which means the blockchain can employ a more decentralized system, he said. A poorly designed consensus mechanism can be tampered with, undermining trust in the blockchain, according to Liebau.

“One of the reasons why we like Cosmos is its deterministic consensus mechanism, Tendermint, that offers instant finality when a transaction is added to a block,” Liebau said. “Finality guarantees the integrity of the ledger — this is of particular importance for financial applications.”