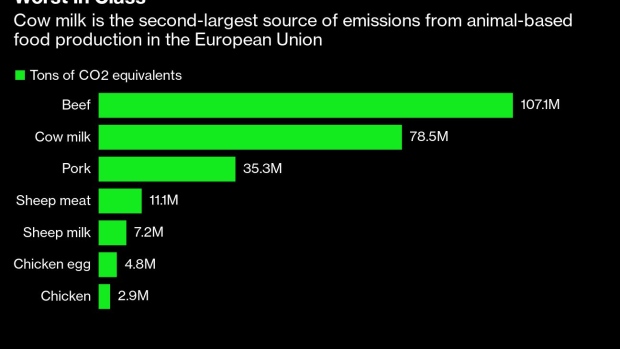 Dairy cows in the milking area at Bizkaigane farming cooperative in Errigoiti, in the Bizkaia province of Spain, on Wednesday, Aug. 25, 2021. As part of its plan to zero out planet-warming emissions by 2050, European Union policymakers have proposed ‘Farm to Fork’, a plan to halve the use of pesticides and antibiotics and make a quarter of all farming organic by the end of the decade. , Bloomberg

(Bloomberg) -- Dairy giant Arla Foods is willing to pay European farmers extra for milk based on how many carbon-reducing activities they can tick off a company list.

The reward program would cover about 20 variables, such as using natural additives in feed to cut methane emissions by cows or following precision farming techniques, Chief Executive Officer Peder Tuborgh said in an interview. The bonus amounts still need to be determined, and the plan could be implemented as soon as next year.

The incentives, which are still being hashed out, are meant to help the Denmark-based co-operative achieve its target of reducing farm-level emissions by 63% this decade. The agriculture industry is being pushed to become greener, and Arla has committed to using fossil-free trucks, renewable sources of electricity and low-energy operations at its sites.

“The more activities you do that reduce the climate impact, the better the milk price you get from us,” Tuborgh said. “We know it will make a huge difference to the farmers if they are financially motivated to do the right thing.”

The Nordic region’s biggest dairy company also is researching how to remove carbon from the atmosphere using plantings and how to make energy production greener by converting manure into biogas or installing solar panels. Those actions could be included in the upcoming milk-price model.

The closely-held producer’s brands include Castello cheese, Lurpak butter and Cocio chocolate milk. It reported revenue of 11.2 billion euros ($12.1 billion) last year, an increase of 6% from 2020.

Almost 9,000 producers in Arla’s European network already receive one extra euro cent per liter (34 ounces) of milk in exchange for allowing annual checks of their climate-related practices. Those reviews ask 200-plus questions about herds, feed, crop production, fertilizer use, manure handling, electricity and fuel. The answers are put into a social network-like database, launched in 2020, so farmers can compare their performance.

“They can benchmark themselves up against other farms and see where they are and how they can improve,” Tuborgh said. That competition is prompting many farmers to adopt practices that not only reduce carbon-dioxide emissions but also improve efficiency, he said.

Arla’s producers emit about half the amount of CO2-equivalent per kilogram of milk than the global average, the company said. And Tuborgh believes those emissions can be reduced even more. “We may even end at the point where this can be CO2-neutral,” he said.