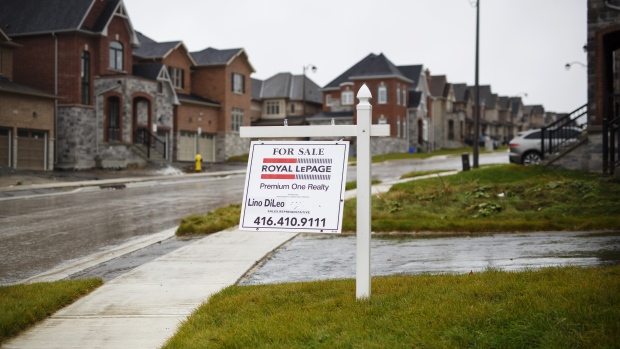 A "For Sale" sign stands in front of homes in East Gwillimbury, Ontario, Canada, on Friday, Nov. 2, 2018. , Cole Burston/Bloomberg

The type of securities blamed for triggering a credit crisis in the U.S. a decade ago could now be part of the solution in Canada, where a cooling housing market is a key risk to its US$1.7 trillion economy.

The Bank of Canada is discussing ways to encourage a more robust market for residential mortgage-backed securities with potential investors. Only about $1.5 billion of Canadian uninsured mortgages have been pooled in RMBS deals, or about 0.1 per cent of the country’s mortgage debt, according to rating company DBRS Ltd. No lender has widely marketed such a deal since September, when private lender MCAP sold $254 million of the notes.

While previous efforts to kick-start an RMBS market have borne little fruit, this time may be different as Canadian home prices are rising at the slowest pace this decade amid higher interest rates, regulatory changes and tax increases designed to reign in surging prices, particularly in Toronto and Vancouver.

“While lenders are very well equipped to manage normal market risks, I suspect they are rather unwilling to take on the additional risk of future government intervention in the housing markets,” said Andrey Pavlov, a professor of finance at Beedie School of Business of Simon Fraser University in Greater Vancouver. “Therefore, lenders are likely more interested today than they have ever been in hedging their residential real estate exposure, and mortgage backed securities would be a good way to do so.”

Lenders create mortgage-backed notes by packaging property loans into securities of varying risk and returns -- too much risk it turned out during the U.S. financial crisis when shady loans made it into MBS tranches. There’s been little evidence risky mortgages have become a feature in Canada. In addition, mortgages are “full recourse” in most of the country, meaning lenders can pursue borrowers even after they’ve walked away from the property.

On top of raising funds, the sellers of the underlying assets can reduce the regulatory capital they have to set aside to cover eventual losses should they meet certain conditions, including selling significant portions of the lower rated, higher risk bond tranches. 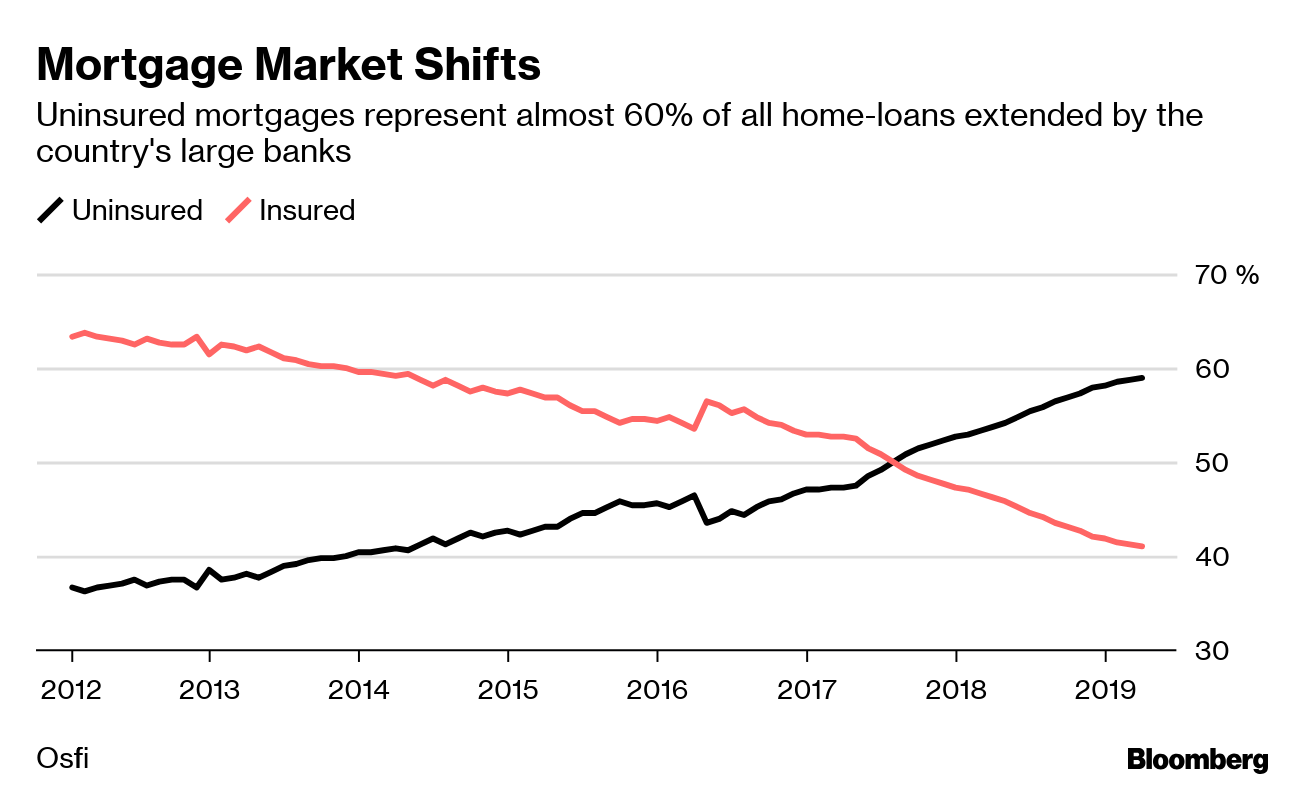 Up until 2016, Canadian lenders relied heavily on Canada Mortgage & Housing Corp., the country’s national housing agency to insure mortgages with down payments of less than 20 per cent and then packaged those loans into mortgage-backed securities to fund obligations. But as part of its efforts to curb taxpayer exposure to the housing market, the government made it more difficult to get insurance. The market for uninsured mortgages took off -- MBS based on the debt less so.

“There’s an ongoing education job around investors just to highlight the difference between that product and the CMHC product, and we are investing in that so that the market grows over time,” Bank of Montreal Chief Financial Officer Tom Flynn said in an interview last week. The RMBS “market is not nearly as developed as the CMHC mortgage bond market is. I would say our hope is over time that market will grow, and the banks generally I believe are interested in issuing that product.”

The Canadian Fixed-Income Forum, a Bank of Canada-led group made up of participants in the bond market, has been working since at least last year to analyze the conditions and incentives that would be required to expand interest in the asset class, according to the minutes of their meetings. It conducted a focus group last month with mostly buy side institutions about the disclosure on the underlying collateral and other features they may require. The group, known as CFIF, was scheduled to discuss the issue again at a June 4 meeting.

One way to bolster investors’ confidence in deals would be by setting up a public database of mortgages used in securitization deals including anonymized details of the borrower, property and loan performance, Bank of Canada governor Stephen Poloz said last month. A similar project was supported by the European Central Bank in a bid to re-start sales of asset-backed securities after investors shunned hard-to-value assets following the seizure of the U.S. mortgage securitization market in 2007.

“A loan level data portal is a great idea,” said Imran Chaudhry, a senior portfolio manager at Forresters Asset Management Inc., which manages about $8.5 billion of assets and has invested in Canadian securitizations. “Issuing public RMBS deals would provide a larger investor base to the issuers and help establish a diversified funding source for them over a longer term.”

The starting point of RMBS as a funding tool isn’t the most attractive for banks as investors may demand an extra yield of 20 to 30 basis points over their senior bail-in debt in a stable market situation, said Chaudhry, who is part of the CFIF. Yet, once a market develops the spreads will tighten and it will make economic sense for the lenders to issue, he said.

“A key domestic risk is a sharp correction in the housing market,” officials at International Monetary Fund said in May 21 statement about the state of the Canadian economy. To be sure strong immigration, underlying strength in the economy and an unemployment rate near historic lows argues against such a scenario.

Lenders’ exposure to an eventual downturn may be increasing. According to the Office of the Superintendent of Financial Institutions, the Canadian bank regulator, the ratio of uninsured over insured mortgages has jumped to the highest since 1997.

At the end of March, the volume of uninsured mortgages surged 14 per cent from a year ago, accounting for about 59 per cent of the $1.17 trillion of home loans at Canada’s federally regulated banks, while insured home loans fell 7.8 per cent from a year ago, according to data from OSFI. On Tuesday, the regulator announced it was increasing a domestic stability buffer for systemically important banks to two per cent of their risk weighted assets from 1.75 per cent, effective Oct. 31, citing vulnerabilities that include household indebtedness.

“To be clear, the system is not broken—it has served Canadians and financial institutions well,” said Poloz in a May 6 speech in Winnipeg. “We should not stop looking for improvement.”

--With assistance from Erik Hertzberg, Chris Fournier and Doug Alexander