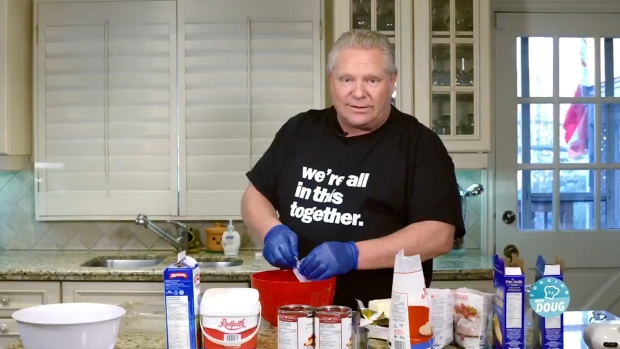 Ontario's premier has released a "Cooking with Doug" video showing how he makes cherry cheesecake. Ontario Premier Doug Ford is seen making cheesecake in a still frame from his social media video. @fordnation on Twitter via The Canadian Press

With his bombastic demeanor and populist agenda, Ontario Premier Doug Ford has often been compared to Donald Trump. That was before COVID-19.

Ford’s handling of the coronavirus crisis has turned his political fortunes around. At his daily news conferences, the 55-year-old leader of Canada’s largest province delivers a calm, factual assessment of the pandemic and the government’s efforts to combat it. He defers to experts. Sometimes he cracks a joke. Occasionally, he chokes up.

A pugnacious politician who once taunted public spectators at Toronto city hall and ridiculed Prime Minister Justin Trudeau as a “camp counsellor and part-time drama teacher,” Ford is now getting high marks for his empathy. That’s helped send his approval rating to 76 per cent in early May from a dismal 29 per cent in early February, according to Campaign Research Inc. polling.

It’s a textbook example of how to manage a crisis, experts say. Ford is doing the one thing that’s required by leaders in times of unease, said Shachi Kurl, executive director of the Angus Reid Institute, a polling organization: He’s assuming the office.

“In a crisis like this, your job is not about being political or being partisan,” she said. “Your job is about being premierly and executing the role of premier.”Global leaders have seen their political fortunes rise and then fall through the pandemic. Trump’s approval rating has fluctuated but is now at 41 per cent, similar levels to before the pandemic, according to a new poll from The Associated Press-NORC Center for Public Affairs Research. British Prime Minister Boris Johnson’s popularity has declined lately as the government began to ease lockdown restrictions. French President Emmanuel Macron has come under fire for dithering.

Ford, who leads a province with more people than 46 U.S. states, may eventually suffer the same fate. But not yet.

Tears at the Podium

Ford, who swept to power in June 2018 on a platform of smaller government, lower taxes and a promise to fight “for the little guy,” has found the reality of office much harder. He’s faced teachers’ strikes as his government moved to cut costs and start digging the province out from under the world’s biggest sub-sovereign debt pile. Net debt will reach $404 billion by the end of March 2021, a 13-per-cent increase from the previous year, according to the province’s fiscal watchdog.

He’s had to reverse course on a number policies — including a cut to autism funding that was seen as heartless — and went to war with Trudeau over a carbon tax. Things went so badly that he did a major cabinet shuffle after one year in office and replaced his finance minister.All that has faded into the distance since the pandemic.

David Soberman, a marketing professor at the University of Toronto’s Rotman School of Management, notes two things Ford is doing right: he listens to experts and has surrounded himself with a strong team.

“Typically populists are very dismissive of people who come from an expert or academic background,” Soberman said. But Ford was among the first in Canada to release epidemiological models of virus projections and has relied on medical officials to craft his government’s policy response. Unlike Trudeau, who appears alone in front of his Ottawa residence most days to deliver virus updates, Ford brings along cabinet ministers and steps to the background while they answer questions.

It’s the empathy he displays that is most surprising to many. At an April news conference, he almost came to tears talking about a newspaper picture that depicted the terrible damage the virus has wreaked on long-term care homes. “You see a loved one with their elderly parent and they put their hand up against the window, that’s heartbreaking,” said Ford, whose own mother-in-law contracted COVID-19.

That doesn’t mean he hasn’t had missteps. Most of Ontario’s 2,000 fatalities have been in long-term care homes, highlighting the shortcomings of a system that cares for vulnerable citizens. His government has also struggled to ramp up testing.

Ford himself has been criticized for breaking his own emergency orders, having his adult daughters over for a visit on Mother’s Day and traveling to his cottage outside of Toronto. He often sounds robotic when reading from a teleprompter and while he comes alive when answering questions, he can be as evasive as the next politician.

What happens to his popularity once the pandemic is over will depend on the economic recovery and the decisions he makes to advance his political ideals of smaller government. The deficit is poised to soar to $41 billion in 2020-21 as its economy shrinks nine per cent this year, according to the fiscal watchdog. That will send the province’s net debt as a proportion of the economy to almost 50 per cent in this fiscal year, up from about 40 per cent.

Kory Teneycke, managing partner at Rubicon Strategy Inc., dismisses detractors who say this new Ford is just a show. “There’s a self-deprecating honesty in him which is kind of endearing,” said Teneycke, campaign manager for the Ford’s Progressive Conservative Party during his winning election run. “Your personality is your personality.”

He also talked about his love of cherry cheesecake and followed up by holding a cooking session online, like a master chef. His recipe contains no less than three packages of Dream Whip.

During a May 9 news conference, a reporter slipped and addressed him as “Prime Minister.” Ford didn’t miss a beat. “Not yet,” he said. “You called me prime minister and I just said, not yet.”

Managing a crisis well is no guarantee of future political success, of course. Winston Churchill lost the election almost immediately after leading Britain to victory in World War II, points out Richard Ciano, principal at Campaign Research. “You can’t get a case where someone played their role as a leader better than Winston Churchill did in WWII.”