Hasbro to Buy Peppa Pig Producer Entertainment One in $4B Deal

Entertainment One Ltd. shares have been an investor favourite since their 2007 listing, surging almost 500 per cent. Investors showed no sign of giving up on them on Friday even after an offer from Hasbro Inc. for the company.

The stock advanced as much as 33 per cent on Friday, trading five per cent above the offer price and almost 500 per cent above the initial public offering price at 100 pence per share. That surge beat out the 20 per cent advance in the FTSE All-Share Index, U.K. rival ITV Plc. and most U.S. entertainment stocks in the period, bar Netflix Inc, which has soared a whopping 8800 per cent. 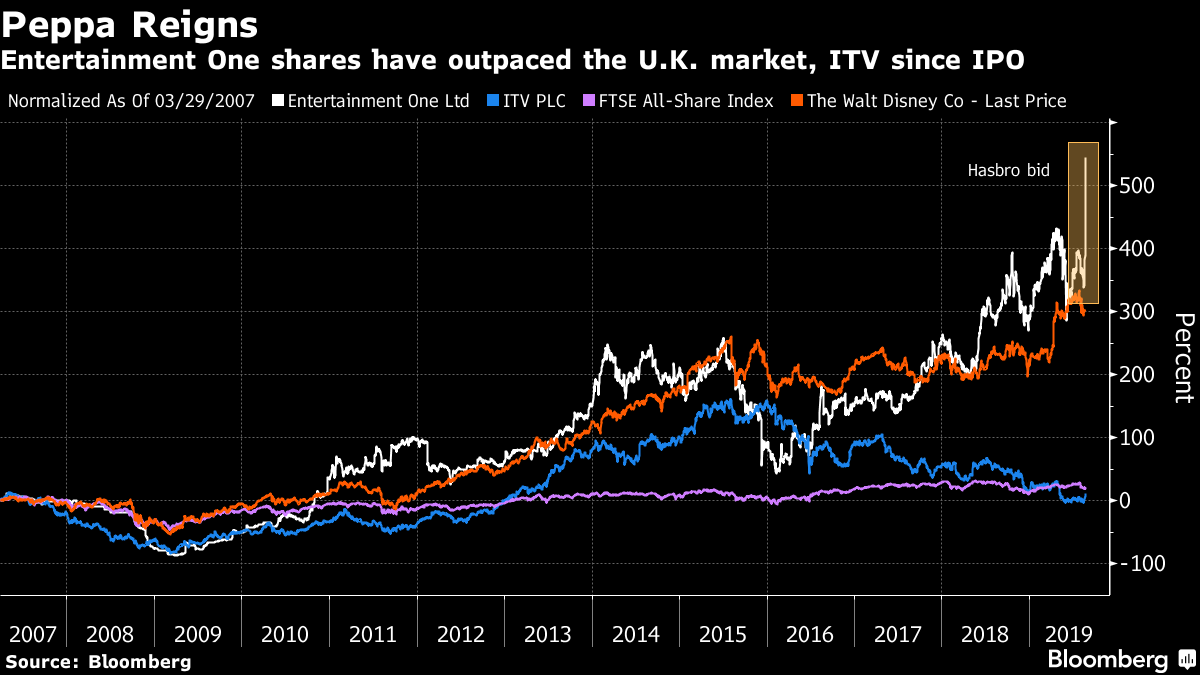 Hasbro’s bid for the company, which also distributes TV and films including zombie apocalypse series ‘The Walking Dead,’ comes at a time when competition in streaming is heating up, as media giants Disney, Comcast Corp.’s NBCUniversal and AT&T Inc.’s WarnerMedia look to launch their own video streaming services in a direct challenge to the likes of Netflix and Amazon.com Inc.

“For Entertainment One the prize asset is Peppa Pig of course, Neil Campling, analyst at Mirabaud Securities, said in emailed comments. With Peppa’s global appeal for the pre-school generation across TV, film, merchandise, theme park and franchising it would fit well alongside Hasbro’s other brands such as My Little Pony, Transformers, G.I.Joe and Power Rangers,” Campling said, adding that these products have branched out successfully in TV and film.

“Sterling has been so weak that the attraction of U.K. assets will have buyers in China & the U.S. sharpening their pencils, as evidence of two deals this week alone,” Campling said.

This isn’t the first time that Entertainment One has attracted interest -- ITV walked away from a bid for the company in 2016. Entertainment One’s shares were trading at 582p as of 10:57 a.m. in London. Shares in peer ITV also gained as much as 5.2 per cent.