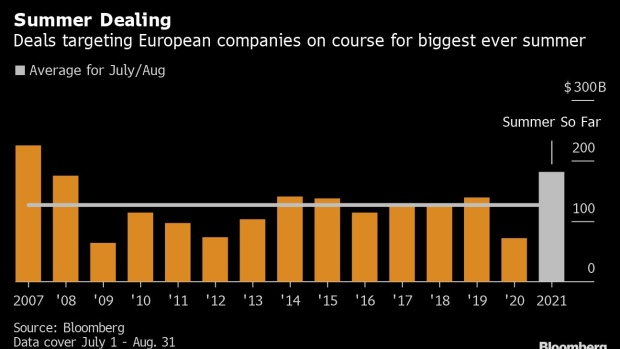 (Bloomberg) -- European dealmakers are well on course for their busiest ever summer.

The relentless pace of global mergers and acquisitions has brought no let up for Europe-based companies and their advisers in the traditionally quieter summer months of July and August.

At $182 billion, the value of deals targeting companies in the region is already at a post-crisis high for this period, according to data compiled by Bloomberg. And a flurry of developments in the last 24 hrs points to a record being set before the month is out, the data show.

Volumes are being driven up by deals across a range of sectors.

On Monday, Parker-Hannifin Corp., the U.S. maker of industrial motion-control systems, agreed to buy the U.K.’s Meggitt Plc for 6.3 billion pounds ($8.8 billion) in cash to strengthen its hand in a resurgent aerospace industry.

Around the same time, the U.K. business services provider Sanne Group Plc revealed it’s in advanced discussions over a roughly 1.5 billion-pound takeover by the asset management platform Apex Group Ltd. Under the country’s takeover rules, Apex has until the end of August to announce a firm intention to bid. Buyout firm Cinven Ltd. has already made several unsolicited offers for Sanne.

Meanwhile in Germany, real estate company Vonovia SE on Sunday nudged up its offer for rival Deutsche Wohnen SE to about 19.1 billion euros ($22.7 billion), sweetening an attempt to woo shareholders after last month’s bid fell short. Vonovia is betting that the addition of 1 euro per share will finally sway enough investors after it missed out on getting to the 50% threshold.

Rothschild & Co. has been the top adviser on deals involving a European target since the start of July, when ranked by value, the Bloomberg data show. It leads U.S. banks JPMorgan Chase & Co. and Morgan Stanley.