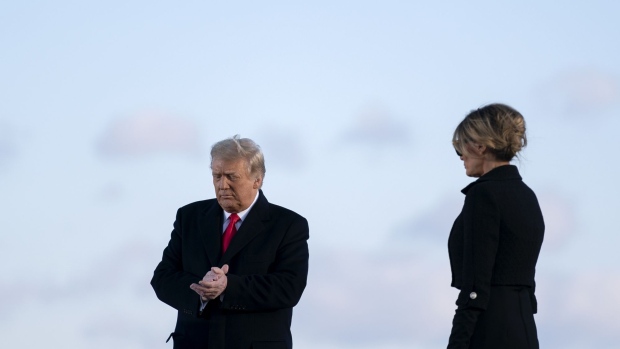 U.S. President Donald Trump, left, and U.S. First Lady Melania Trump prepare to depart a farewell ceremony at Joint Base Andrews, Maryland, U.S., on Wednesday, Jan. 20, 2021. Trump departs Washington with Americans more politically divided and more likely to be out of work than when he arrived, while awaiting trial for his second impeachment - an ignominious end to one of the most turbulent presidencies in American history. , Bloomberg

(Bloomberg) -- Facebook Inc. asked its content Oversight Board to review the social network’s controversial decision to suspend former U.S. President Donald Trump’s account indefinitely, ceding the verdict on whether to keep or overturn the ban to an outside panel of experts.

“The board’s decision on this case will be binding on Facebook and will determine whether Mr. Trump’s suspension is overturned,” the Oversight Board said in a statement. “Facebook has committed not to restore access to its platforms unless directed by a decision of the Oversight Board.”

The Oversight Board, made up of high-profile academics, lawyers and others from around the world, was established by Facebook last year to provide a check on the tech giant’s power, reviewing cases that could change the company’s broader approach to policy. The panel has also been asked to make recommendations on Facebook’s policies with regards to world leaders, who have been given more room to break rules on the platform because of public interest in what they say. Trump’s accounts on Facebook and Instagram were suspended on Jan. 6 following the violent riots at the U.S. Capitol. Trump has since been permanently banned from Twitter Inc.’s social media service.

Trump will have an opportunity to write a letter contesting his indefinite ban. The board will convene a panel of five of its members, who won’t be identified, to review the decision and see if it aligns with Facebook’s community standards and overall principles of human rights and free expression, according to the statement. The decision, which needs to be approved by the entire board, will take as long as 90 days, and will be made public.

Whatever the board’s verdict, it’s likely to prompt a vigorous debate, and will also set precedent for the group’s authority over Facebook, according to Kate Klonick, an assistant professor at St. John’s University School of Law, who has been following the board closely. “On the one hand, it divests a huge amount of power from FB to give the board authority over this,” Klonick said in a tweet. “On the other hand, maybe the Board is too nascent to take on such an enormous question.”

Mark Zuckerberg, Facebook’s co-founder and chief executive officer, has voting control of the company, and he has called the Oversight Board a check on his power.