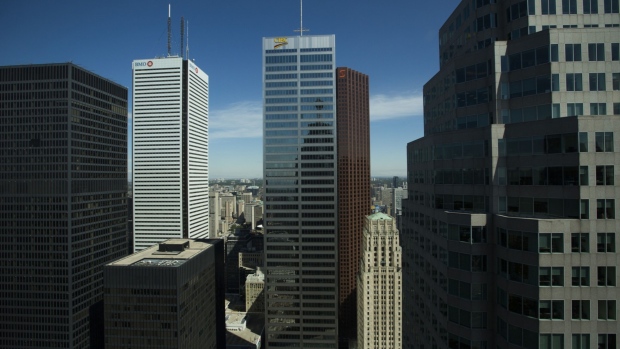 A Canadian pension fund is planning a makeover of an iconic Toronto bank complex as competition for tenants heats up amid a spate of modern new towers.

QuadReal Property Group Ltd., a unit of British Columbia Investment Management Corp., wants to replace two 1970s-era buildings at Commerce Court on the corner of Bay and Wellington Streets with a new development that will allow for larger offices and a spate of new amenities.

It will be a “brand, spanking, new state-of-the-art office,” Remco Daal, president of Canadian Real Estate at QuadReal, said in an interview at Bloomberg’s Toronto offices. “All the cool places to eat and to work out, and collision spaces that everybody talks about, will be part of this.”

Toronto’s bank towers have long dominated the city’s skyline. Each of the big five banks have at least one, including Royal Bank of Canada’s shiny gold building, and Toronto-Dominion Bank’s monolithic black slabs. But new buildings offering more open and eco-friendly spaces that cater to the growing cohort of millennial workers are springing up.

They include a 46-story building being developed by Cadillac Fairview Corp, and one pitched by Oxford Properties Group which would be of Canada’s biggest mixed-use projects

Still, office vacancy rates in city’s downtown remain the lowest in North America driven by a tech and financial-services boom. Daal said Toronto is likely in the middle of its office-building cycle with strong growth ahead.

Vancouver-based QuadReal plans to take down the South and East towers of the 2 million square foot Commerce Court complex, which together have 18 floors. Those were part of a three-building addition in the 1970s designed by architect I.M. Pei.

The original Commerce Court North, which houses the headquarters of Canadian Imperial Bank of Commerce, was built in 1931. It includes a vaulted gold-coffered ceiling and classic Art-Deco design and will be incorporated into the makeover.

The plan is in early stages and still needs city approval. If successful, occupancy could be as early as 2025, Daal said.

CIBC, which currently takes up about 650,000 square feet at Commerce Court, is relocating its headquarters to two new office towers on the south side of Bay St. It’s unclear how much space the bank will require in Commerce Court after the move.

“It’s highly unlikely that there’s a full-exit here, but it’s going to be a reduced scale with significant retail presence so we’re working through that as we speak,” Daal said in the interview. “The corner of King and Bay is a very difficult corner to have real estate on so once you have it you don’t want to give it up.”

CIBC declined to comment on its plans regarding Commerce Court as details are still being finalized, a representative said in an email.

Like many of its peers, QuadReal is looking to expand its real estate portfolio, which has more than C$37 billion ($28 billion) worth of assets. While the majority of its assets are in Canada, it’s is aiming for an equal split between Canada and the rest of the world including cities like New York, London and Hong Kong in the next three years.

It’s bullish on investing in logistics, data centers, residential developments and mixed-use projects in large, urban cities. The company has also partnered with the asset management division of Royal Bank of Canada for a new C$7.5 billion open-ended fund with an average annual total return target is six per cent.

“We may like building, but if it’s too expensive, we might provide mezzanine to owners of that building or senior debt, we can look at everything from senior debt all the way down to equity,” Lopez said. “It gives us the ability to invest in an entire capital stack.”