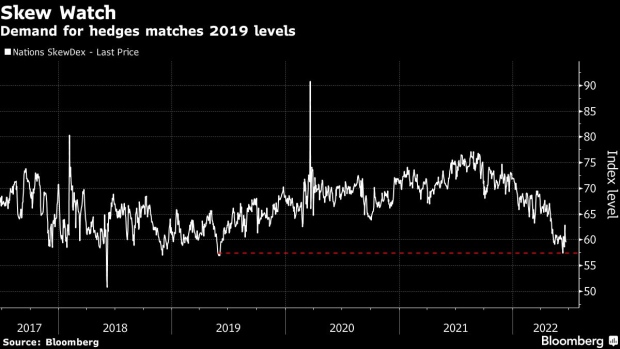 (Bloomberg) -- For all the pain that has piled up in the US stock market, one thing has been in surprisingly short supply: Fear.

Virtually every corner of Wall Street is being rattled by worries that rising interest rates will drive the economy into a recession, spurring large price swings in everything from junk bonds to foreign currencies. But the CBOE Volatility Index, the so-called fear gauge of stock-investors’ sentiment, is holding well below levels seen in past bear markets.

Options strategists and bankers cite a simple reason: The S&P 500 has been staging a long, orderly descent from the record level hit at the start of the year as the Federal Reserve pulls back its flood of pandemic-era stimulus. That differs from shock-driven crashes like the ones caused by Covid-19 in March 2020 or the collapse of Lehman Brothers Holdings Inc. in September 2008, both of which sent the VIX surging as investors sought to hedge the risk of wild market swings.

“Negative sentiment dominates the conversation as the excesses of the bull market are cleared out,” Lewis Grant, a senior portfolio manager at Federated Hermes, wrote in a note. “Yet the VIX index is only marginally elevated. For equities at least, this is an orderly bear market rather than outright panic.”

In fact, this year the VIX hasn’t broken the key level of 40, which many experts see as peak fear signal. It jumped to twice that level early in the pandemic and during the credit crisis of 2008.

The current market more closely resembles the one that followed the dot-com collapse, another period when stock valuations slid from what many considered unsustainable highs. The VIX currently implies a 2% daily move in the S&P 500, according to Talal Dehbi, senior sales and quantitative strategist at PrismFP.

“The current behavior is playing out similar to the 2000-2002 dot-com bear market, with no big sudden shocks but sustained high realized volatility,” he said.

As a result, traders are not flocking to volatility hedges. Take the skew, which measures the relative cost of hedging against a one standard-deviation drop in the S&P 500. Its cost is hovering around June 2019 levels.

The sidelined worries about volatility may also reflect another element of the stock market’s slide. As deep as it has been, with the S&P 500 down 18% this year, the causes are well-known: tighter monetary policy and surging inflation. The main question is when those two let up enough to allow the market to turn around.

On Friday, the S&P 500 rallied over 3%, the biggest gain since May 2020, after a reading on inflation expectations eased and a Fed official suggested recession fears are overdone.

There are few signs of that changing. The VVIX Index -- which measures the implied volatility in options on the volatility index -- is hovering below 100 and recently reached its lowest since January 2020. That means traders are expecting smoother sailing ahead for the VIX index.

That makes equities relatively unique. A gauge of expected volatility in the Treasury market, the ICE BofA MOVE Index, is hovering near highs hit at the peak of the March 2020 selloff. The same is true of the JPMorgan Global FX Volatility Index.

“Inflation, Fed policy and interest rates are central to the risks in the market. Thus, the MOVE is exceptionally high,” said Dean Curnutt of Macro Risk Advisors, citing the divergence in bond and stock volatility.

BNP’s Shing said he’s surprised that the VIX hasn’t risen along with measures of corporate risk, such as the cost of credit default swaps protecting against a default, which has risen sharply this year.

In recent bear markets, the VIX has typically risen to 45 before the S&P 500 bottoms out. That’s roughly where it crested in 2002, which marked the bottom of the dot-com bust. On Friday, it ended around 27, down on the day.