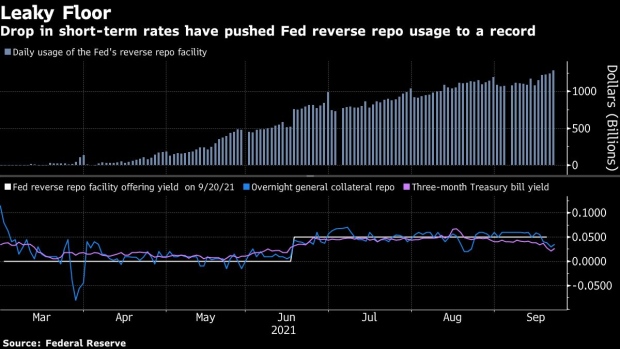 (Bloomberg) -- The Federal Reserve doubled the counterparty limit for its overnight reverse repurchase agreement on Wednesday to underpin short-term rates amid a cash glut that’s helped drive record demand for the facility.

Policy makers directed the New York Fed to adjust its per-counterparty limit in the facility to $160 billion a day from $80 billion. The Fed kept its target range unchanged from 0% to 0.25%, and its offering yield on the RRP steady at 0.05%.

The central bank has been tinkering with the facility this year as the Fed’s ongoing quantitative easing and Treasury’s drawdown of its cashpile have flooded the financial system with dollars at a time when assets like T-bills and other short-term assets are scarce. That has pushed usage for the reverse repo facility to successive all-time highs, reaching $1.28 trillion as of Wednesday.