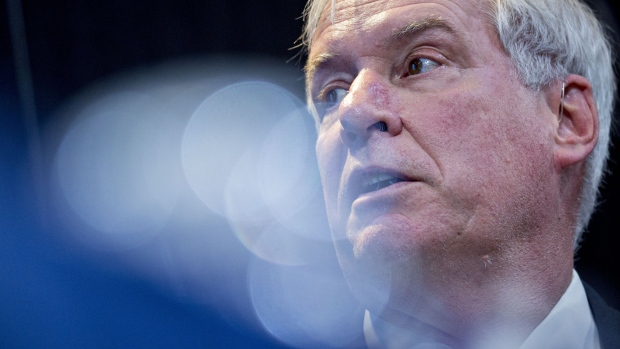 Eric Rosengren, president and chief executive officer of the Federal Reserve Bank of Boston, speaks during a Hutchins Center on Fiscal and Monetary Policy event at the Brookings Institution in Washington, D.C., U.S., on Monday, Jan. 8, 2018. The event was entitled Should the Fed Stick with the 2 Percent Inflation Target or Rethink It. , Bloomberg

Federal Reserve Bank of Boston President Eric Rosengren continued to push back against further interest-rate cuts by the central bank, arguing he’s not convinced that slowing trade and global growth will significantly dent the U.S. economy.

“We’re likely to have a second half of the year that’s much closer to 2 per cent growth,” Rosengren said Monday in an interview with Kathleen Hays on Bloomberg Television. “I’m not saying there are not circumstances in which I’d be willing to ease. I just want to see evidence we are going into something that is more a slowdown.’’

Rosengren, a voter this year on the Federal Open Market Committee, was one of two officials who dissented when the panel cut rates on July 31. Two days later he released a statement saying he did not see a “compelling case” for adding additional monetary accommodation, while also raising concerns that a cut would add to financial stability risks.

Kansas City Fed President Esther George also opposed the decrease, the first time Chairman Jerome Powell had faced a double dissent since he took the Fed’s helm in February 2018. Minutes of last month’s meeting will be released at 2 p.m. in Washington on Wednesday.

The Boston Fed chief said policy makers have “plenty of things to be worried about,” ranging from slowing global growth and volatility in financial markets to geopolitical risks in the U.K. and Hong Kong.

Still, he expects a resilient American consumer will continue to drive economic output in the U.S., and the Fed shouldn’t try to boost economic activity in other countries by cutting rates.

“Just because other countries are weak, if we’re strong, it doesn’t necessarily mean we should be easing as well,” he said. “It’s much more efficient for China and Europe to expand their own economies” through their own policy actions.

Rosengren said he wasn’t overly concerned about the recent plunge in 10-year Treasury yields, which briefly fell below two-year yields last week. That, known as a yield-curve inversion, has preceded many past recessions.

“The goal of monetary policy is not to get the yield curve right, it’s to get unemployment and inflation right,” he said. Rosengren said he was not convinced Treasury yields were signaling a future dramatic rise in unemployment, which would spur rate cutting.