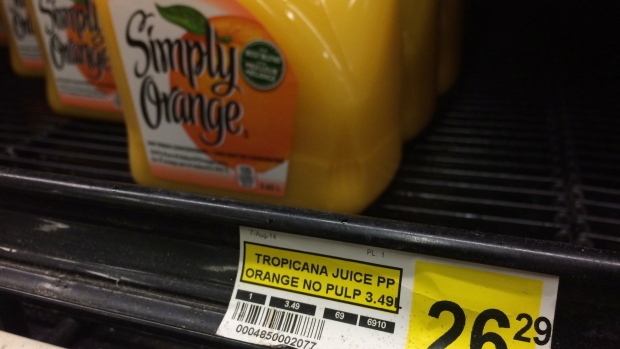 A price tag lists the price of a jug of orange juice at a grocery store in Iqaluit, Nunavut on December 8, 2014. Newly published research has concluded that food insecurity in Nunavut actually grew after the implementation of a federal program to fight hunger in the North. The study, published Tuesday in the Canadian Medical Association Journal, found that the ability of northerners to dependably put food on the table declined significantly during the years the Nutrition North program was being rolled out and has remained at that lower level. That's despite a budget that has increased 65 per cent, from $60 million in 2011 to $99 million in 2018. , THE CANADIAN PRESS/Sean Kilpatrick

Newly published research has concluded that food insecurity in Nunavut grew after a federal program was brought in to fight hunger in the North.

The study, published Tuesday in the Canadian Medical Association Journal, found that the ability of northerners to dependably put food on the table declined significantly during the years Nutrition North was being rolled out and has remained down.

"We can definitely observe that (food insecurity) has been increasing despite the presence of this big program that is supposed to make food more affordable and accessible," said Andree-Anne Fafard St-Germain, a researcher at the University of Toronto.

Inadequate access to nutritious food due to lack of money is a major problem in the North, where groceries often cost two or three times what they do elsewhere. Rates of food insecurity are about four times higher than in southern Canada.

The federal government has long chipped in for Arctic groceries. In 2011, Nutrition North was instituted by the Conservative government to replace a program that subsidized food shippers. That subsidy was transferred to retailers on the theory that market forces would make the program more efficient and just as effective.

Ottawa says that between 2011 and 2015, the cost of a food basket for a family of four dropped about five per cent and the weight of eligible items shipped north increased by about 25 per cent.

But in analyzing survey responses from 2007 to 2016 collected by Statistics Canada in 10 Nunavut communities, Fafard St-Germain found those numbers weren't showing up on the dinner table.

In 2010, food insecurity affected 33 per cent of families. That number grew in 2011 to 39 per cent. By 2014 -- a year after full implementation of Nutrition North -- nearly 47 per cent of northerners couldn't count on a square meal.

Those results weren't the result of economic changes in the territory, said Fafard St-Germain. Nor have things improved.

"Every period just seems to be getting worse and worse, generally.

She suggests that subsidized food is being bought in larger amounts by the families that can afford it. Low-income families -- and Nunavut has large income disparities -- are being left out.

"It is possible that some people are eating more fruits and vegetables and milk and all of those foods that are being subsidized. But others are not really benefiting from this because the food is still way too expensive."

Fafard St-Germain's work is the first to look at Nutrition North's impact on families, but it's not the first to find shortcomings.

The auditor general found in 2014 that the government was largely in the dark about whether Nutrition North had actually done anything for the people who needed it most.

The federal government has promised reform. A working group is expected to table recommendations early next year.