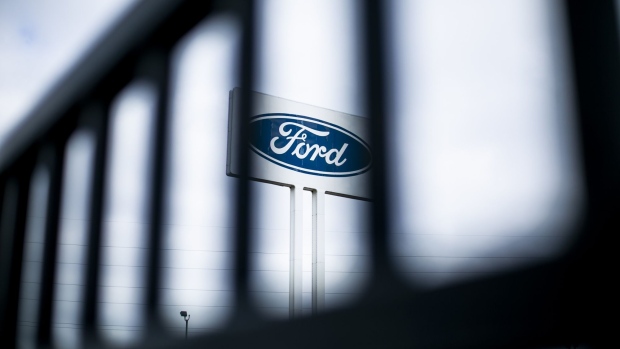 Signage is displayed outside the idled Ford Motor Co. Michigan Assembly plant in Wayne, Michigan, U.S., on Monday, March 23, 2020. The auto industry is escalating its push for U.S. assistance to help weather the impact of a global pandemic that has halted or will soon stop production at 42 out of 44 plants that assemble vehicles in the country. Photographer: Anthony Lanzilote/Bloomberg , Bloomberg

Ford Motor Co. is accelerating plans to produce ventilators along with General Electric Co., moving up the start of output by months and aiming to churn out 50,000 desperately needed medical devices in the next 100 days.

The automaker will convert an auto-parts plant in Michigan to make breathing machines designed by Airon Corp. starting the week of April 20, according to a statement. The effort is an addition to a collaboration Ford and GE Healthcare first announced their last week.

Ford’s Rawsonville components factory in Ypsilanti, Michigan, will run around the clock on three shifts staffed by 500 paid volunteers from the United Auto Workers union, according to the company. After the 100-day mark, the plant will be able to build 30,000 ventilators a month.

After being called out on Twitter by U.S. President Donald Trump last week, Ford said it was “pulling out all the stops” to build ventilators and other devices needed to deal with the coronavirus pandemic. In addition to collaborating with GE, the company is helping 3M Co. boost production of air-purifying respirators and assembling plastic face shields for health-care workers.

Ford Chief Executive Officer Jim Hackett said March 24 that the carmaker and GE were targeting initial production in June. The Airon-designed ventilator is a simplified model that Ford will be able to build sooner and in greater volume.