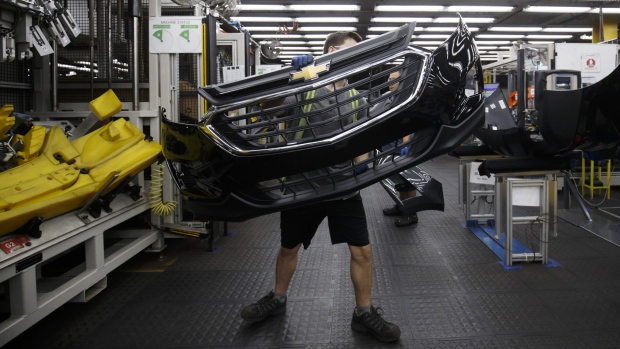 President Donald Trump on Friday ordered General Motors Co. to make ventilators for coronavirus patients, invoking a federal law that gives him vast powers over industry in crises and acting as the company is within weeks of starting production on the equipment.

Trump said in a statement that he signed a memorandum “directing the Secretary of Health and Human Services to use any and all authority available under the Defense Production Act to require General Motors to accept, perform, and prioritize federal contracts for ventilators.”

GM has already been moving to manufacture ventilators at some of its factories in partnership with Ventec Life Systems Inc.

The president issued an executive order last week laying groundwork for him to invoke the law, but since then he has expressed reluctance to use the powers. He has repeatedly said manufacturers had volunteered to produce coronavirus materials.

But on Friday, his patience appeared to run out with GM. He assailed the company and its chief executive officer, Mary Barra, in a series of tweets in which he accused the firm of moving slowly and demanding too high a price for its ventilators.

As usual with “this” General Motors, things just never seem to work out. They said they were going to give us 40,000 much needed Ventilators, “very quickly”. Now they are saying it will only be 6000, in late April, and they want top dollar. Always a mess with Mary B. Invoke “P”.

It wasn’t clear what prompted the tweets, which took the company by surprise, according to people familiar with the matter.

“Our negotiations with GM regarding its ability to supply ventilators have been productive, but our fight against the virus is too urgent to allow the give-and-take of the contracting process to continue to run its normal course,” Trump said in the statement. “GM was wasting time.”

The Law Trump Can Use to Order More Ventilators: QuickTake

Just hours before his tweets, Trump said in an interview on Fox News that companies -- including GM -- were responding appropriately to the coronavirus outbreak.

A little more than an hour after Trump’s first tweet, GM and Ventec announced they would build ventilators at the automaker’s parts plant in Kokomo, Indiana, which they’ve been working around-the-clock for a week to convert into a medical-device facility.

Democrats, including Vice President Joe Biden, Trump’s likely opponent in the November election, had urged Trump to invoke the DPA earlier. Many U.S. governors have complained they’re unable to obtain sufficient supplies of ventilators, respirator masks and even basic medical supplies like gloves and gowns.

“That’s really good news,” Biden said Friday after Trump’s statement. “Now, we were suggesting to do that over a month ago. But the point is, he’s done it, and I congratulate him for it.”