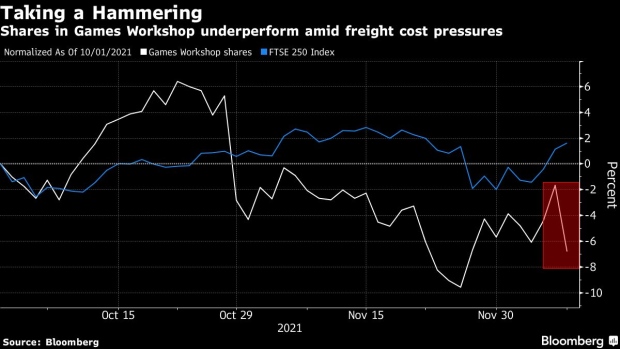 (Bloomberg) -- Table-top games, where players battle with characters like goblin warriors and elves, are the latest victims of the global supply-chain crunch.

Games Workshop Group Plc, maker of the Warhammer series of games, said in a statement Wednesday that profitability has been hurt by freight costs and foreign exchange effects. The stock -- a pandemic market darling as lockdowns boosted demand for home-based hobbies -- fell as much as 8.5%.

Operating profit before royalties for the six months to Nov. 28 is estimated to be down about 15 million pounds ($20 million), the Nottingham, England-based company said, while also announcing a new computer game licensing deal with Japan’s Nexon Co.

“Currency has been a material headwind, shipments have been delayed, and the retail channel remains affected by restrictions in various countries,” Peel Hunt analyst Charles Hall wrote in a note. “We continue to expect freight costs to be up 10 million pounds in the full year, but currency headwinds have moderated.”

Games Workshop shares are down 18% this year, compared with an 83% advance in 2020. Shares in meal-kit maker HelloFresh SE, another stay-at-home beneficiary, also fell on Wednesday after its forecast for 2022 disappointed analysts.