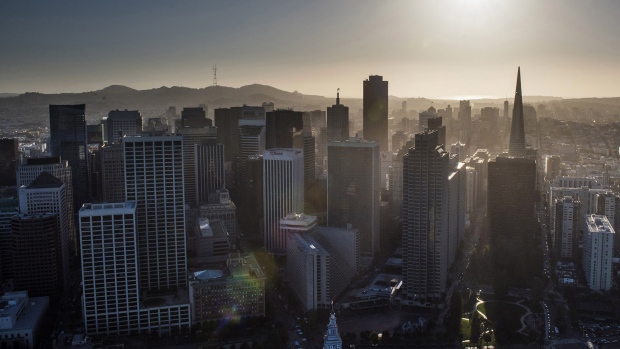 The Transamerica Pyramid building, right, stands in the skyline of downtown in this aerial photograph taken above San Francisco, California, U.S., on Monday, Oct. 5, 2015. With tech workers flooding San Francisco, one-bedroom apartment rents have climbed to $3,500 a month, more than in any other U.S. city. , Photographer: David Paul Morris/Bloomberg

The San Francisco-based company sold 7.14 million shares Wednesday for $20 each, it said in a statement. The shares had been offered at $20 to $22 each, according the company’s filings with the U.S. Securities and Exchange Commission.

Listing stumbles by high-profile companies including We Co., the parent company of WeWork, have cast a pale over IPOs, which had thrived this year in the U.S. despite trade tensions with China and stock market volatility. Postmates Inc., which submitted a confidential filing in February, is one of the companies that could delay its listing to 2020, people familiar with the matter have said.

Biotechnology firms haven’t been immune to the market slide.

Vir, founded in 2016, counts SoftBank Vision Fund, Bill & Melinda Gates Foundation and Singapore’s Temasek Holdings Pte among backers. Its most advanced treatment is for hepatitis B is in phase 2 clinical trial and it has a flu treatment in phase 1 trial, according to its prospectus.

The offering is being led by Goldman Sachs Group Inc., JPMorgan Chase & CO., Cowen Inc. and Barclays Plc. The shares are expected to begin trading on Nasdaq Global Select Market Friday under the symbol VIR.

To contact the reporter on this story: Crystal Tse in New York at ctse44@bloomberg.net

To contact the editors responsible for this story: Liana Baker at lbaker75@bloomberg.net, Michael Hytha, Matthew Monks