The future of global real estate

Housing prices worldwide are rising the most since before the global financial crisis, following a market frenzy seen in places from New Zealand to Canada to Singapore during the pandemic.

Average prices jumped 7.3 per cent in the 12 months to March, the fastest pace since the fourth quarter of 2006, Knight Frank’s Global House Price Index report showed Thursday. Turkey topped the list, registering 32 per cent growth, followed by New Zealand at 22.1 per cent. The U.S. took fifth spot at 13.2 per cent, its steepest increase since December 2005. 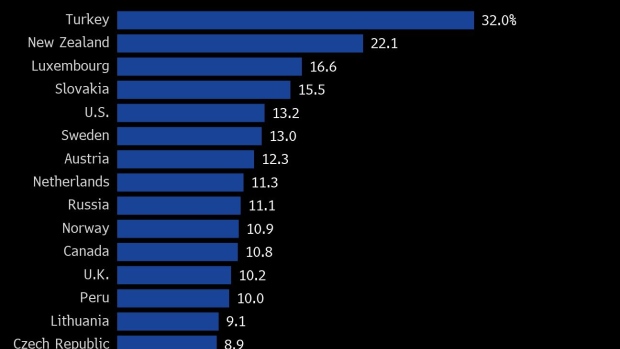 Massive fiscal and monetary stimulus to bolster economies during the health crisis has stoked a property boom worldwide. That’s also fueling concerns of bubbles, and several countries have already moved to cool the market.

New Zealand has removed tax incentives for property investors, and the government expects home price inflation will slow to just 0.9 per cent by June next year. China has issued a slew of steps to rein in developers and bank lending to the sector.

“With governments taking action and fiscal stimulus measures set to end later this year in a number of markets, buyer sentiment is likely to be less exuberant,” Knight Frank said in the report. “Plus, the threat of new variants and stop-start vaccine rollouts have the potential to exert further downward pressure on price growth.”

In Asia, Singapore charted the biggest price gain at 6.1 per cent, followed by South Korea at 5.8 per cent and Japan with 5.7 per cent. Hong Kong, the world’s priciest property market, saw 2.1 per cent growth. The index benchmarks the average prices across 56 countries and territories.