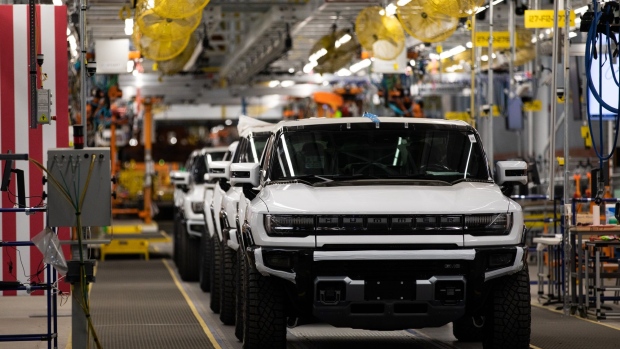 (Bloomberg) -- A Biden-backed proposal to give an extra tax break for the purchase of electric cars made in the U.S. with union workers will undergo a review by the Senate parliamentarian who will determine whether it qualifies under budget rules to move as part of President Joe Biden’s nearly $2 trillion economic package.

The plan to offer $4,500 more in tax credits to consumers who buy those vehicles has drawn vehement opposition from a variety of people, including Tesla Inc. Chief Executive Officer Elon Musk, Senator Joe Manchin and trade officials in Canada, Mexico and the European Union.

But their lobbying may be unnecessary if the office of Elizabeth MacDonough, the parliamentarian, concludes it doesn’t mesh with budget rules. Her office will review the electric vehicle provisions along with other tax credits contained in a $1.75 trillion spending bill passed by the House and now under consideration in the Senate. Lawmakers are using a budget reconciliation procedure that shields the measure from a filibuster but requires 50 votes in the Senate.

Democrats may have to go back the drawing board or scuttle the measure all together if she decides that it violates the so-called Byrd Rule, which prohibits the use of budget reconciliation to advance policy changes with “merely incidental” budgetary impacts.

Maryland Democratic Senator Ben Cardin said changes to the electric vehicle tax credit’s domestic union bonus provision were already being discussed due to opposition from Manchin, a West Virginia Democrat who serves as a powerful swing vote and has a non-union Toyota Motor Corp. plant in his home state.

“There have been some suggestions to alternatives by those that opposed it initially and they are being looked at,” Cardin, who serves as a member of the Senate’s tax writing committee, said in an interview. “It’s an evolving discussion.”

As passed in the House, the $7,500 tax credit for electric vehicles would be extended, with a $4,500 additional credit for vehicles that are made using domestic union labor, and an additional $500 for manufacturers that use domestically produced batteries for a total of $12,500. President Joe Biden has strongly supported the idea of backing domestic manufacturers and union workers.

Other clean energy credits in the Democrat’s package, such as ones for wind and solar power, also include measures rewarding companies that use domestic materials and apprenticeship programs that may not pass muster with parliamentarian.

Cardin declined to say what those tweaks would be, but a person familiar with the matter said alternatives being discussed include tying the bonus to so-called prevailing wage requirements instead of unionization though it remains to be seen if that construct would win the parliamentarian’s approval.

Zach Moller, a budget expert at the think tank Third Way, said the union requirements and other stipulations appear to be in a gray area of the Byrd rule, which is named for the late West Virginia Senator Robert Byrd.

“But that doesn’t mean it won’t make the bill at the end of the day,” Moller said.