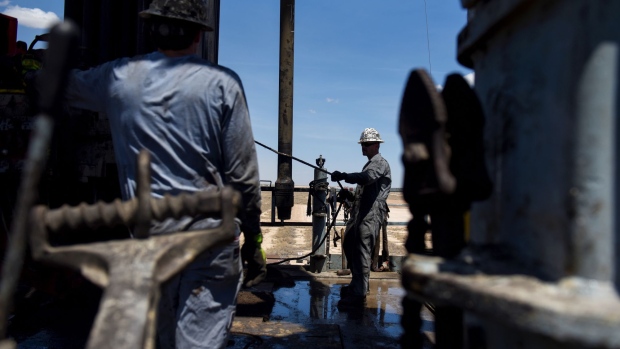 Contractors operate a drilling pipe at a Colgate Energy LLC oil rig in Reeves County, Texas, U.S., on Wednesday, Aug. 22, 2018. Spending on water management in the Permian Basin is likely to nearly double to more than $22 billion in just five years, according to industry consultant IHS Markit. , Bloomberg

(Bloomberg) -- When it comes to being being skeptical about oil stocks, few are more bearish than James Jampel.

Jampel manages HITE Carbon Offset, a $187 million hedge fund with short-selling fossil-fuel assets as its central focus. The fund returned almost 30% last year when the the S&P 500 Energy Index, which includes Exxon Mobil Corp., Chevron Corp. and ConocoPhillips, dropped 35%. This year, the fund was down about 9% at the end of July, compared with the energy index’s 33% increase in the same period.

The recent rally in oil stocks has been “the biggest dead-cat bounce in history,” said Jampel, who’s also the co-chief investment officer of HITE Hedge, which oversees about $650 million in all for clients.

In a nutshell, Jampel’s view is that nothing can save the oil industry. The pace of the transition away from fossil fuels will quicken as better technologies emerge and long-term demand for oil and gas fades, he says. The equity markets are starting to reflect this pessimistic outlook with oil stocks trading at roughly half their five-year highs.

“Industries where volume is declining, where demand is declining, have a lot of trouble making money,” Jampel said in an interview.

Most of the biggest oil companies so far haven’t managed to come up with transition strategies that will help the planet limit temperature rises to the critical level of 1.5 degrees Celsius. Even European oil majors, which have made more ambitious commitments to cutting CO2 emissions than their U.S. peers, aren’t on track to reach the reductions needed, according to Bloomberg Intelligence.

The vast majority of investment firms use transition strategies, whereby they try to engage with oil companies to force them to shift toward a cleaner business model. Some decide that’s a waste of time, and exclude oil from their portfolios. A small group is ratcheting up the pressure by deploying short strategies that make money as oil assets decline in value.

Oil is “poisonous,” Jampel said. “We need to stop using it for the sake of the planet.”