This year’s top-performing cryptocurrency is up almost fourfold and you’ve likely never heard of it.

Litecoin, which has gained more than 360 per cent since the beginning of the year, is outpacing all its crypto peers, including Ether and XRP, as well as the best-known and largest token Bitcoin. It has a market cap of about US$8.4 billion, making it the seventh-largest digital asset, according to data compiled by Mosaic Research Ltd.

The rally can partly be attributed to Litecoin’s upcoming halving (also known as halvening), whereby the number of coins awarded to so-called miners is slashed by 50 per cent. The idea is that a cut in supply will not only drive up its price but will also prevent an erosion of value. Miners currently receive 25 new Litecoins per block, but following the halving -- which is expected to fall on Aug. 6 -- they will receive 12.5.

Halving typically happens roughly every four years and the run-up to it has, in the past, coincided with a rally in the underlying tokens. Four years ago, when the last Litecoin halving occurred, the coin gained about 60 per cent in the three months beforehand, according to data from CoinMarketCap.com. And the phenomenon isn’t isolated to Litecoin, either -- Bitcoin is set to undergo its next halving in May 2020 and its biggest proponents are already seizing on the drop in supply as a catalyst for further gains.

“Every time we’ve seen a halving event in Bitcoin or Litecoin, the price has risen astronomically,” said Mati Greenspan, senior market analyst at trading platform eToro, in a phone interview. “So if that pattern continues, what we’ve seen so far is small potatoes in comparison,” he said. “This is quite normal for the crypto market.”

Cryptocurrencies are undergoing a renaissance this year on the back of wider acceptance from mainstream institutions and increased attention from Wall Street. E*Trade Financial Corp. is said to be readying cryptocurrency trades on its platform, as is Fidelity Investments. AT&T Inc. now lets customers pay their bills using digital tokens, the first U.S. carrier to do so. And among the most anticipated developments is an upcoming announcement from Facebook Inc., which is reportedly set to release more details on the basics of its own digital token. 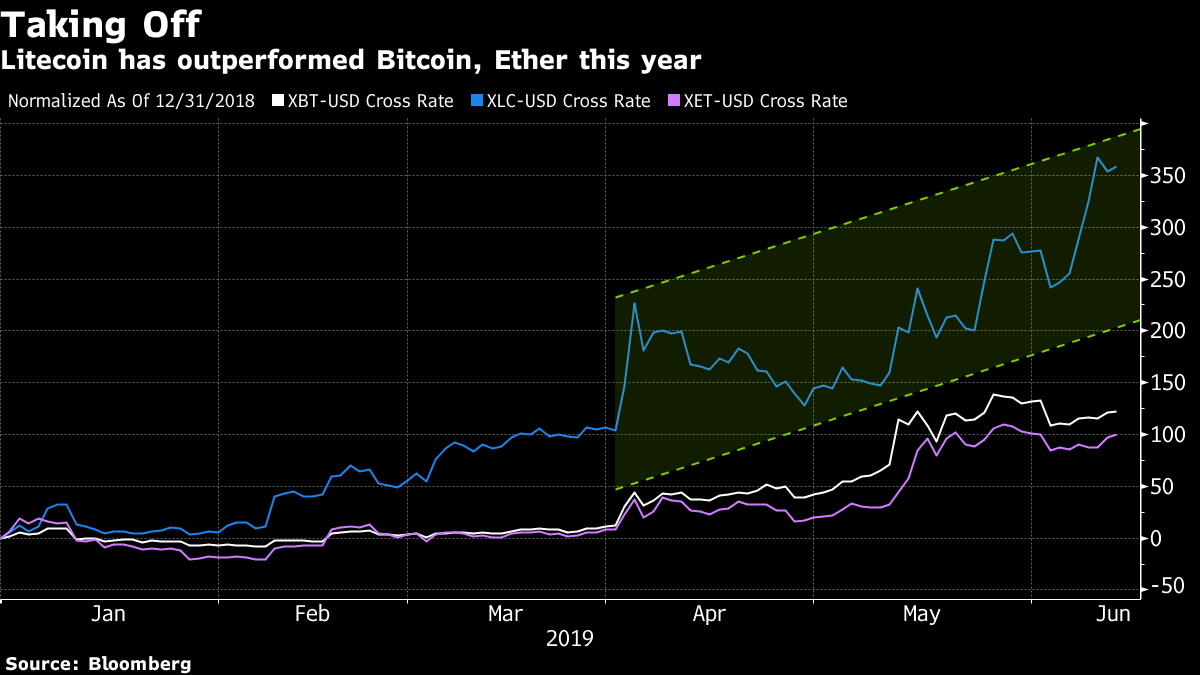 These developments, among others, have pushed up the price of Bitcoin by 120 per cent since the beginning of the year. Ether, too, has gained close to 100 per cent. Litecoin, which was trading below US$30 at the end of last year is now worth US$133.

The elements behind the rally “are justifiable and real and factual,” said David Tawil, president of crypto hedge fund ProChain Capital. “It’s just a question by how much does it gain?,” he said. “Is it reasonable to think that this halving, this catalyst, should allow the Litecoin to reach its previous highs? I think so. I think it could.”

But the recent resurgence in digital assets is masking an unwelcome reality: relatively few are using Bitcoin, the world’s largest cryptocurrency, for anything other than speculation. Merchant transactions account for only about 1.3 per cent of economic activity, according to data from Chainalysis Inc., a number that’s stayed little changed even over the boom and bust cycles of the prior two years. Huge upswings or downswings in prices from day to day -- which isn’t uncommon in the crypto world -- make it difficult to utilize for things like bill paying or even to purchase a cup of coffee.

After peaking in January 2018, Litecoin transactions are down dramatically, falling about 84 per cent since the peak. They are up since the beginning of this year, however. And transaction fees in Litecoin have been unpredictable, jumping 10-fold in late May before dropping again, according to BitInfoCharts.com. Such volatility can make developers hesitate to create apps for this blockchain, as a jump in fees can impact usage.

Litecoin’s founder, Charlie Lee, cashed out of all of his holdings at the height of the digital asset bubble in 2017 when the token was trading for about US$375. It was a prescient decision -- Litecoin lost almost 90 per cent of its value the following year. Lee, who founded the coin in 2011, said at the time that he sold or donated all of his holdings and that the liquidation was aimed at preventing a “conflict of interest.”

Critics accused Lee of recognizing the frenzy around digital assets and cashing out ahead of a severe decline. Lee told Bloomberg News at the time that he was turning his focus to increasing use by merchants. Representatives for Litecoin didn’t comment.

But now, with 53 days to go, Litecoin fans will continue to count down until the halving. “It’s a good potential trading opportunity,” said Tawil. “I don’t think it’s important in the broader fundamental development of crypto. To us, that’s much more important.”