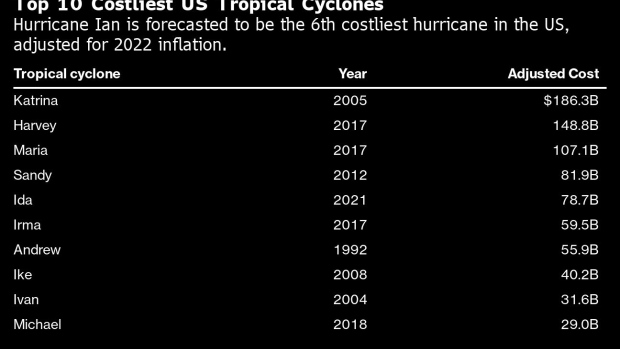 A shopper pushes a cart of plywood at a Home Depot ahead of Hurricane Ian in St. Petersburg, Florida, US, on Tuesday, Sept. 27, 2022. Ian made landfall over western Cuba as a major Category 3 hurricane, while churning toward Florida in what could be the worst storm to hit Tampa in over a century. , Bloomberg

(Bloomberg) -- Hurricane Ian is forecast to wreak more financial havoc than its infamous predecessor Andrew did 30 years ago when it slams into Florida.

Damages from Ian are expected to range from $60 billion to $70 billion given the latest forecasts, according to Chuck Watson, a disaster modeler with Enki Research. That would make Ian the sixth-costliest US hurricane, below Ida’s $78.7 billion in 2021, according to data from the National Oceanic and Atmospheric Administration.

Andrew is etched in the minds of many Floridians after it left widespread destruction and almost two dozen deaths in its wake when it swiped the state in August 1992.

Ian is expected to gather strength through Wednesday as it churns through the warm waters of the Gulf of Mexico toward cities, towns and beaches along Florida’s western coast. The latest modeling indicates a wall of water as high as 12 feet (3.7 meters) may inundate some areas.