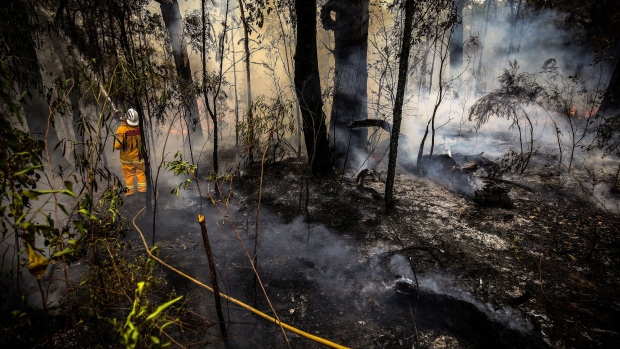 A New South Wales (NSW) Rural Fire Service volunteer douses a fire during back-burning operations in bushland near the town of Kulnura, New South Wales, Australia on Thursday, Dec. 12, 2019. The smoke blanketing Sydney is a “public health emergency,” according to a coalition of Australian doctors and researchers who say climate change has helped fuel the wildfires that have produced unprecedented haze. , Bloomberg

Investors worldwide are underestimating the financial risks from climate change, and companies need to start disclosing their exposure, according to the International Monetary Fund.

At present, asset prices fail to reflect the risk of extreme weather events that may cost US$1 trillion annually starting in 2050, the IMF said.

“Equity valuations as of 2019 do not appear to reflect the predicted changes in physical risk under various climate change scenarios,” IMF researchers said in the report, which included an analysis of equity markets in 68 developed and developing countries over the past 50 years.

The IMF also flagged transition risks, as governments and markets move toward a carbon-neutral economy.

Global temperatures have risen 1.1 degrees Celsius since pre-industrial times and at current levels of greenhouse gas emissions are set to rise by 3 degrees Celsius by the end of the century, according to the U.N.’s Intergovernmental Panel on Climate Change.

Such an increase could unleash irreversible environmental events --from drought to sea-level rise-- and make some areas of the planet uninhabitable. 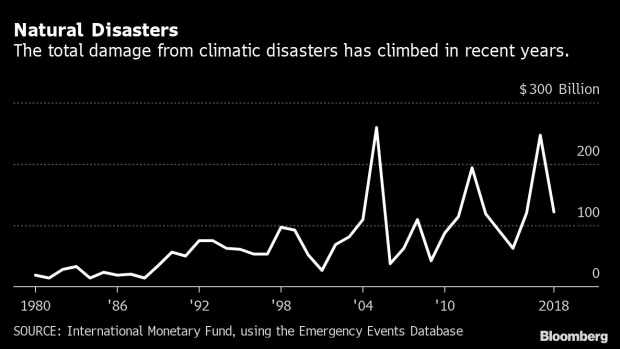 The number of extreme weather events including droughts, wildfires, floods and storms have jumped fourfold since the 1980s, climbing to an average 200 per year for the past 20 years, according to the IMF report.

The cost of these climate disasters has also spiked, rising above US$120 billion annually from US$22 billion in the 1980s, while holding steady at 0.2 per cent of global gross domestic product for the past 30 years.

Still, the impact of extreme weather events on stock prices has been generally modest, the IMF report acknowledged, as investors largely discount the potential risks.

“Investors should demand a premium for holding assets exposed to a future increase in physical risk induced by climate change,” the report said. “A sudden shift in investors’ perception of this future risk could lead to a drop in asset values, generating a ripple effect on investor portfolios and financial institutions’ balance sheets.”

The fund acknowledged there are several hurdles: Equity investors, who tend to be focused on the short-term, face “a daunting informational challenge” with research that’s long-term by nature.

There’s also no regulation or standard method for corporations to disclose climate risks in many countries.

Bond investors have started to price in climate risks, though, as yields are directly linked to performance over time, such as U.S. municipal debt in a region that faces flooding challenges as water levels rise.