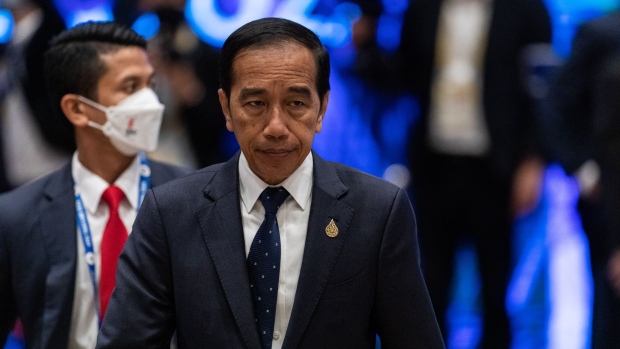 Joko Widodo, Indonesia's president, at the Asia-Pacific Economic Cooperation (APEC) leaders informal dialogue with guests in Bangkok, Thailand, on Friday, Nov. 18, 2022. China and the US are seeking to win over nations to their vision for the region at the APEC summit in Bangkok on Friday, the final meeting in a week of international meetings in Southeast Asia this week. , Bloomberg

(Bloomberg) -- Indonesia’s newly enacted criminal code poses a fresh threat to LGBTQ people in the country, already one of the least tolerant places in the world.

The bill bans extramarital sex, including in extramarital relationships and between unmarried people who live together. Same-sex relationships aren’t legally recognized in Indonesia so by definition, any sexual activity between two people of the same gender is “extramarital” -- and, now, illegal.

“Indonesia does not recognize same-sex marriage, meaning that adultery and cohabitation articles might be used against LGBTQ couples,” said Andreas Harsono, senior Indonesia researcher at Human Rights Watch. “Let’s say a parent or a spouse report an individual to the police, it will be a legal case.”

The new criminal code will fully come into effect three years after President Joko Widodo signs it, which he is expected to do within 30 days.

Indonesia is one of the most hostile places in the world for LGBTQ people, according to a 2019 Pew Research report, which found that just 9% of Indonesians say homosexuality should be accepted in society, the smallest proportion in Asia. The country doesn’t protect the LGBTQ community from discrimination, and police have used anti-pornography laws to raid places frequented by gay or transgender communities. Homophobic attacks are common.

Increasing animosity toward the LGBTQ community sets Indonesia apart from other big economies in Asia. India’s Supreme Court will consider legal recognition of same-sex marriage early next year, and Thailand moving toward expanded rights for LGBTQ families. Singapore recently repealed the colonial-era ban on sex between men but still upholds the definition of marriage as between a man and a woman.