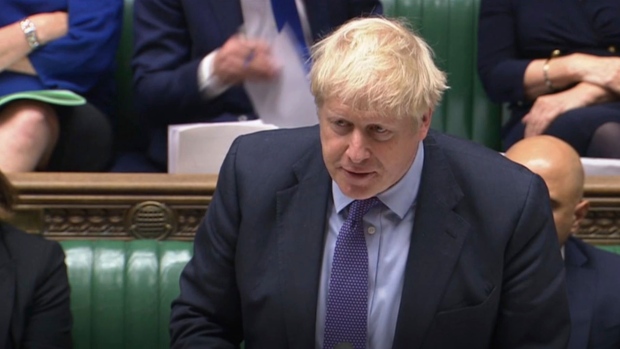 Prime Minister Boris Johnson is making his case directly to members of the U.K. Parliament, as his office warns he will scrap his attempt to pass a Brexit deal and move straight to an election, if lawmakers defeat him tonight and vote for another delay.

He will find out Tuesday evening whether he has any chance of getting his deal through Parliament — and whether he can do it ahead of his Oct. 31 deadline.

His moment of truth will come at around 7 p.m. in London, with what’s known as the Second Reading vote — on whether Parliament agrees with the general principles of the bill. There will then be another vote immediately afterward on his proposed fast-track timetable for passing the law.

Follow developments as they happen here. All times U.K.

Key Developments:
-Commons now debating the so-called second reading of the Brexit bill — essentially the general principle of the agreement

-Prime Minister Boris Johnson opens the debate, saying a vote for his deal will unleash a “tide” of investment into Britain; Justice Secretary Robert Buckland to make closing remarks

-House of Commons votes on the second reading at 7 p.m. and then immediately on the proposed fast-track timetable for rushing the law through Parliament (known as the program motion)

The prime minister may have the votes to get his deal approved but faces a major battle to convince MPs to rush the law through Parliament in just a few days. If they refuse his request for a speedy timetable, Johnson has little chance of meeting his goal of getting Brexit done by Oct. 31.

The premier’s team hit back, with one senior government official in Johnson’s office saying he will abandon the bill entirely if he loses the vote on the fast-track timetable motion on Tuesday.

The official said the prime minister will ditch the bill if Parliament votes again for a delay and the EU offers an extension to the Brexit deadline to Jan. 31. The official said the government will pull the Bill, there will be no further business for Parliament, and the Johnson will move to trigger an election before Christmas.

The official’s comments may put more pressure on MPs to agree to the accelerated timetable ahead of the vote. The pound fell by as much as 0.5% to $1.2891, a fresh low for the day.

Johnson opened the debate in Parliament on his deal, calling on MPs of all parties to back his Withdrawal Agreement Bill so that voters can focus on domestic priorities instead of Brexit.

Passing the bill later Tuesday will allow the nation to “turn the page and allow this parliament and this country to heal,” Johnson said. A vote to support the new Brexit agreement would provide a “shot in the arm” for the British economy and unleash a “tide” of investment, he said. The premier was replying to a question on why the government hasn’t provided economic impact assessments of his deal.

Boris Johnson will be making the case for a three-day timetable for his Brexit bill to pass through the House of Commons when he opens the debate shortly, according to a U.K. official, though the prime minister won’t say what he’ll do if MPs vote against the accelerated schedule.

But precedent suggests the bill could be pulled. According to the official, since so-called program motions were introduced in the 1980s, there is only a single example — in 2011 — of one being voted down. That bill was withdrawn, the official said.

Prime Minister Boris Johnson will open the main debate on his Brexit legislation in the House of Commons, his spokesman told reporters, with Justice Secretary Robert Buckland making closing remarks at about 6:30 p.m.

Voting down the timetable — known as the program motion — for the three-day passage of the Withdrawal Agreement Bill through the House of Commons would have “serious implications,” spokesman James Slack said, declining to say what the government plans to do in that scenario, including whether the Brexit bill would be pulled.

“If the program motion is passed, we have a clear path to leave on Oct. 31,” Slack said. “If it’s not passed, there’s no guarantee the EU will grant an extension.”

Prime Minister Boris Johnson’s Brexit deal could permanently bind Northern Ireland to European Union law, according to an Irish judge at the bloc’s second-highest court, who suggested the accord may eventually bring the people of the island of Ireland together.

Johnson’s agreement would have “very long-term consequences for the continued separation of Northern Ireland from Ireland,” Judge Anthony Collins said at an event in Brussels late Monday. That’s because EU law and practice would continue to be applied, which will aid the economic development of the region, he said.

Former Conservative MP Nick Boles, who now sits as an independent in Parliament, has proposed an amendment that would force the government to seek an extension of the Brexit transition period to Dec. 2022 if it hasn’t agreed a trade deal with the European Union by the deadline at the end of next year.

I have tabled the following amendment to require the government by default to seek an extension of the transition to Dec 2022 unless MPs pass a resolution to the contrary. We must stop No Deal Brexit in Dec 2020. pic.twitter.com/oixTl7aGa9

Clause 30 of the EU (Withdrawal Agreement) Bill. What happens if the Government doesn’t propose an extension? Parliament would have no say and we would exit the transition period on the 31 Dec 2020 even if a trade agreement hadn’t been reached by then with the EU; ie no deal. pic.twitter.com/mbCAsrX0eB

The main opposition’s foreign affairs spokeswoman Emily Thornberry said the Labour Party is “outraged” at the government’s accelerated timetable for debating its Brexit bill, but stopped short of saying the party would oppose what it sees as an “artificial” deadline. She told the BBC a decision would be made at a shadow cabinet meeting later on how to vote on Tuesday.

Housing Secretary Robert Jenrick told BBC radio the government will not accept any amendments to the Brexit bill that “compromise the integrity of the deal we have secured from the EU,” implying the government will pull the bill altogether and seek a general election if MPs change Johnson’s legislation to include a second referendum or to keep the U.K. in the EU’s customs union.

Labour has repeatedly voted down Johnson’s attempts for a general election, arguing an extension must be agreed with the European Union first.

For the European Union, Brexit has been a “waste of time and a waste of energy” when the bloc should have been doing other things, European Commission President Jean-Claude Juncker said.

Standing with EU Council President Donald Tusk before the European Parliament in Strasbourg, Juncker said the EU has done all in its power to prevent a no-deal Brexit. He reiterated that the European Parliament -- which has a veto over the Brexit deal -- would only be able to ratify the deal after the British Parliament. That’s a potential spanner in the works when it comes to Boris Johnson’s ambition to leave the bloc on Oct. 31.

EU Council President Donald Tusk said the situation on Brexit is complicated by the events in the House of Commons on Saturday, and a delay will depend on what the U.K. Parliament “decides or doesn’t decide.” Tusk is still consulting the EU’s 27 leaders on how to respond to Boris Johnson’s extension request, he told the European Parliament in Strasbourg.

Housing Secretary Robert Jenrick told Sky News there will be “sufficient” time for members of Parliament to go over the Withdrawal Agreement Bill and that the “vast majority” know where they on Brexit.

But MPs from across the House of Commons are threatening to vote against Boris Johnson’s accelerated timetable for his Brexit plan, arguing three days of debate is not enough for proper analysis of the 110-page piece of legislation.

Former Conservative Cabinet minister Rory Stewart, who now sits as an independent, told BBC radio Parliament should have “normal time” to discuss the bill, highlighting concerns from voters who wish to remain in the European Union and a lack of trust in Johnson’s government.

Johnson: Get Brexit Done and Move On (Earlier)

On the eve of the votes, the prime minister appealed to members of Parliament to back his deal and push it through the House of Commons.

“We have negotiated a new deal so that we can leave without disruption and provide a framework for a new relationship based on free trade and friendly cooperation,” Boris Johnson said in an emailed statement.

“I hope Parliament today votes to take back control for itself and the British people and the country can start to focus on the cost of living, the NHS, and conserving our environment,” he said. “The public doesn’t want any more delays, neither do other European leaders and neither do I. Let’s get Brexit done on Oct. 31 and move on.”