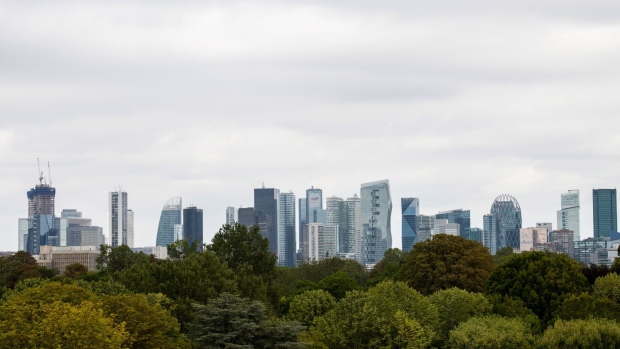 La Defense business district viewed from the Mouvement des entreprises de France (MEDEF) business conference at Longchamp racecourse in Paris, France, on Thursday, Aug. 19, 2021. French economic policy should shift to address the challenges of the climate transition for industry and employment, and focus less on the Covid-19 pandemic, the chief economist of the country’s treasury said. , Bloomberg

(Bloomberg) -- GraniteShares has listed a record 62 exchange-traded products in Paris on a single day as it builds out its offering of leveraged bets on major U.S. stocks.

Sixteen of the strategies offer either long or short exposures with three-times leverage on companies including Amazon.com Inc., Apple Inc. and Tesla Inc., the firm said in a Thursday press release. Other listings amplify the moves in baskets of U.S. tech stocks.

After launching in 2016, GraniteShares has grown to manage about $1.6 billion in assets. It has five products in the U.S. and more than 60 in Europe now, mostly in London, according to data compiled by Bloomberg. Some of the products listed in France are also available in the U.K.

The previous record for ETP listings in a single day on the Euronext Paris exchange was 40, a GraniteShares spokesperson said by email.

The firm says the vehicles are intended for sophisticated investors taking high-conviction positions. Alongside competitor Leverage Shares, GraniteShares is a specialist provider of complex investing strategies -- made accessible via the ETP boom -- that were once the preserve of Wall Street financiers.