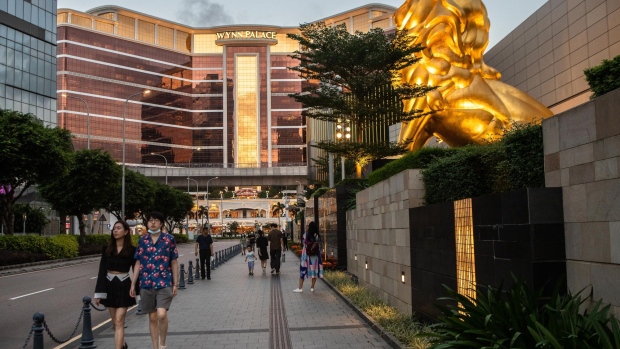 (Bloomberg) -- Macau’s six casino operators won new licenses to continue running their businesses in the city, as a firm linked to Genting Group failed in its attempt to gain entry to the major gaming hub.

The committee in charge of the bidding of new licenses said at a press conference on Saturday the government will discuss contract details with the winners later and settle on official agreements before the end of the year. The new licenses, expected to take effect at the beginning of next year, are allowed to carry a maximum term of 10 years, according to Macau’s gaming law.

The announcement concludes a sweeping change to Macau’s gambling industry that started in September last year, when authorities proposed new gaming regulations to strengthen government control over casino operations and crack down on junkets’ role in soliciting high-rolling bettors from mainland China, where gambling remains illegal. The law was passed in June and the bidding process for new gaming licenses started at the same time, with existing ones due to expire by the end of the year.

The decision to retain all existing operators eliminated a major uncertainty facing an industry hit by the double whammy of Covid-induced tourism drought and China’s crackdown on high rollers to curb capital outflow. By reshaping Macau’s gaming landscape, Beijing is pushing the enclave to reduce its reliance on gambling -- which contributes 80% of the local government’s income -- and diversify into other sectors such as tourism, conferences, Chinese medicine and finance.

The license holders must prioritize the safeguarding of local employment, the development of the overseas tourism market and investment in non-gaming businesses, Secretary for Administration and Justice Cheong Weng Chon said at the press conference.

“The operation and development of our gaming industry has come to a certain scale today, but there are also some problems,” Cheong said. “For example, the source of our tourists is too concentrated. It’s not healthy.”

Macau relies on mainland China for the bulk of its visitors, and its tourism has been severely battered during the Covid-19 pandemic as Beijing’s zero tolerance to the virus means repeated lockdowns and visa restrictions that keep people from traveling. In July, when the enclave faced its biggest outbreak, the city shut down for two weeks, leaving casinos with almost zero income.

Gaming revenue in the city has plunged since March and fell to record low of $49 million in July, a 98% decline from the pre-Covid levels in 2019.

While the final contracts will stipulate how much operators need to invest in developing the overseas market and non-gaming sectors, as well as specific projects, in a force majeure, some of the contract terms and conditions could be temporarily waived, Cheong said.

Melco Chairman Lawrence Ho said the company is committed to Macau and its development as Asia’s premier tourist destination, according to a statement on Saturday.

SJM said in a separate statement that it’s confident in Macau’s long-term growth prospects and is committed to the sustainable development of the local economy.