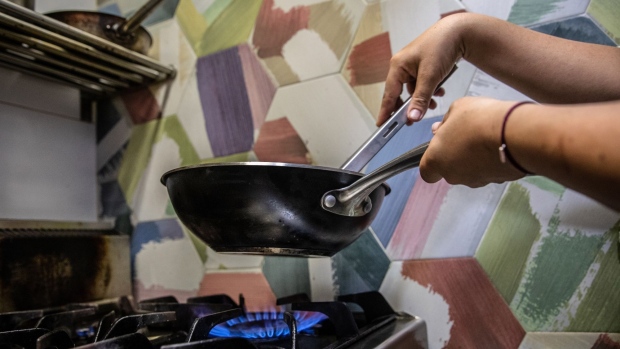 A resident cooks on a domestic gas oven hob in the Molins de Rei district of Barcelona, Spain, on Thursday Sept. 23, 2021. Energy prices are soaring from the U.S. to Europe and Asia as economies emerge from the pandemic and people return to the office. , Bloomberg

Europe’s going through an energy crunch with electricity prices at record highs and fears that the continent may have to shut factories to ensure homes have gas for heat. It’s an awkward situation, to say the least, as the U.K. prepares to host the global climate summit COP26 next month and the European Union begins to put its Green Deal into action.

There are two ways to explain what’s going on: a nuanced view that grapples with the complex factors at play, and a narrative view that finds a convenient way to simplify the situation.

One nuanced view is neatly laid out in a 1600-word analysis by Nikos Tsafos, an energy and geopolitics expert at the Center for Strategic & International Studies. The price of most commodities is determined by the vagaries of supply and demand. In recent months, Europe has had to contend with:

There are a host of reasons behind each of those phenomena. But if you wanted was a simple narrative, there are plenty of facts to cherry pick to suit your worldview.  If Europe’s climate policies are your primary bugbear, for example, you might say something like: “Green warriors are on a mission to stamp out prosperity as we know it.” That’s the title of an opinion piece that ran in Britain’s The Telegraph newspaper.

Or, if you’re bound by a climate law, as the U.K. government is, you could double down on the energy transition. “The U.K.'s exposure to volatile global gas prices underscores the importance of our plan to build a strong, home-grown renewable energy sector,” Kwasi Kwarteng, the business secretary who’s also responsible for energy issues, wrote on Twitter. “In moving away from fossil fuels, we can insulate ourselves.”

That split narrative played out during the energy crises that struck California and Texas. Both states faced blackouts when hit with extreme weather events over the past year. Tsafos saw Californians urge the government to do more to speed up the transition to clean energy, even though retiring gas power plants too early might have been the problem. Whereas in the Texas freeze, some residents blamed wind and the Green New Deal — that isn’t law yet — even though the major issue was malfunctioning gas infrastructure.

Public opinion is often influenced by simplified narratives that may not always reflect the facts. And crises present a ripe opportunity for opinion makers who know that fear sells. That’s why some U.K. newspapers have run front-page articles about a “Winter of Woe” or how energy bills are headed for a “Catastrophic Price Rise.”

Whether those new arguments take hold, however, depends on the existing base of knowledge and prevailing narratives. “The oil industry’s propaganda around climate issues has been pervasive in the U.S. for decades,” said Carroll Muffett, president of the nonprofit Center for International Environmental Law. “While we’ve seen industry efforts in the EU, they’ve never reached the levels of pervasiveness, funding and coordination we’ve seen in the U.S.”

The level of anxiety over what climate change could bring is higher in Europe. Even pit against the fear of higher energy bills and blackouts, people appear to have a higher tolerance for tough changes, especially when politicians promise that they will provide financial support to poor households. Germans, who pay some of the highest energy bills in Europe, have just given the climate-forward Greens party their best-ever mandate. A similar energy crisis in the U.S. would have been much easier to exploit by those opposing climate action, says Muffett.

Eventually though narratives only have so much power. If European leaders aren’t able to manage what might be a rough winter and energy prices rise to levels that financial aid won't help, public opinion could shift. It’s important to be realistic, says Tsafos, and acknowledge that the transition to clean energy may not be as smooth as we’d like.