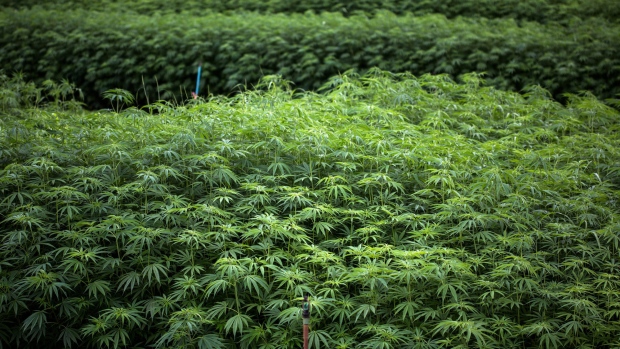 Hemp plants are grown for medical research purposes at the Royal Agricultural Station Pang Da in Samoeng, Chiang Mai province, Thailand, on Friday, July 6, 2018. Thailand, known for its tough policies against drug trafficking, is taking a page from Canada and other countries and is seeking to lead the way in Asia in legalizing medical marijuana. Photograph: Taylor Weidman/Bloomberg Photographer: Taylor Weidman/Bloomberg , Bloomberg

Thailand is taking steps to become the first country in Southeast Asia to legalize medical marijuana and is considering exporting the substance that’s currently banned there.

In the global rush to legalize marijuana, cannabis companies are looking for less expensive locations to mass-produce the cash crop. With its good growing climate and as a hub for shipping and medicine, Thailand is viewed as a low-cost place to produce marijuana and then export it.

“There will be a rush to produce as much cannabis as possible and there’s going to be a global shortage very soon,” said Tyler Anthony, senior vice president of client services at Electrum Partners, a U.S. venture management company that has met with companies interested in Thailand. “You need to hit a much broader scale of production and reduce costs -- Thailand will allow that to happen.”

Foreign firms, however, will have to wait as the government seeks to first award the rights to produce, extract and research the plant to Thai companies. That’s out of concern that a string of patent requests filed by overseas firms could allow them to muscle Thai companies out of what’s projected to be a US$62.9 billion global marijuana market by 2024, according to Zion market research.

“Exporting is an opportunity -- once the right time comes -- and that opportunity should be given to Thai producers first,” said Deputy Prime Minister Prajin Juntong. “It could be in the form of a joint venture with foreigners, but only as long as Thai’s have a part in it.”

Thailand would be the first in Asia to fully legalize production as well as medical use of marijuana, though South Korea has a limited legalization policy that allows the import of cannabidiol though not cultivation of the crop. Bloomberg Intelligence reports that South Korea may look to Thailand for imports once legalization is set to take effect in 2019. Neighboring Singapore and Malaysia are debating legalization.

Firms in the U.S. and Canada are among those that would like to use Thailand as a production and exporting hub for marijuana. Costs could be slashed and proximity to large markets in India and China would allow for export growth of the cash crop.

Thailand might not even have to export cannabis as there will be plenty of people interested in flying to the country for its marijuana, says Australia’s Medifarm Director Adam Benjamin in a phone interview.

“Its strong tourism, agricultural and export industries can propel Thailand’s medical cannabis growth faster than many other countries that have already legalized,” said Benjamin, who is looking to bring operations to Thailand. "China will come to Thailand for medical cannabis treatments, but Thailand has to move very, very quickly."

Legalizing medical marijuana in Thailand would mean that patients could be prescribed cannabis for their ailments, and research centers and medical institutes could produce and test the drug.

Recreational use would still be forbidden, in one of the world’s toughest drug enforcement countries. Those illegally possessing marijuana still would face up to 10 years in prison with trafficking a crime punishable by life imprisonment or the death penalty.

Thailand’s government is not looking to decriminalize recreational marijuana use, even with the approval of medical marijuana.

The legal change, which is being debated in Thailand’s National Legislative Assembly, could take effect as soon as January. The government wants to legalize medical marijuana before the general election in February, said Dr. Sophon Mekthon, chair of the Government Pharmaceutical Organization, who took the lead in drafting the law change.

“The slower we move, the more opportunities we lose out on,” Sophon said in a phone interview. “We might just look to serve Thai demands in the first stage, but there is the opportunity to start doing exports if we have supply left over."