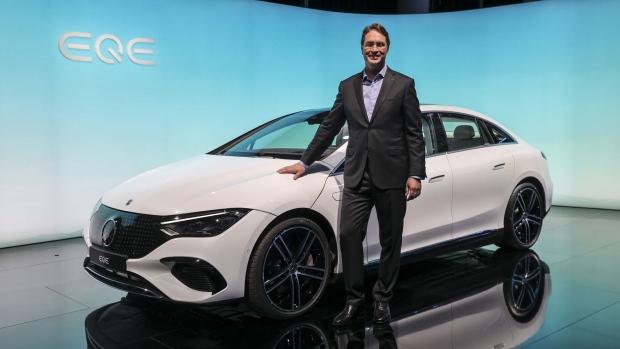 Ola Kallenius, chief executive officer of Daimler AG, unveils the Mercedes-Benz AG EQE electric vehicle (EV) during an event ahead of the IAA Munich Motor Show in Munich, Germany, on Sunday, Sept. 5, 2021. The IAA, taking place in Munich for the first time, is the first in-person major European car show since the Coronavirus pandemic started. , Bloomberg

(Bloomberg) -- After years in a grudge match against rival BMW to become the world’s biggest luxury automaker, Mercedes-Benz is calling it quits.

The Stuttgart-based manufacturer will cut some entry-level vehicles from its product line and shave 25% off of its share of entry-level cars in the segment by 2026, CEO Ola Källenius said in a far-reaching interview May 18 in Monaco.

It will also focus on higher priced—higher-margin—vehicles in the coming years, he said. Last year, Mercedes sold 2 million vehicles worldwide, while BMW sold 2.5 million, beating Mercedes for the first time in five years. A spokesperson declined to confirm the sales target for 2022.

“We are not going to go in and compete with the volume makers—that’s not our place,” said Källenius. “We will still cater to the entry-level luxury segment. But we will trim the portfolio. Today we have seven models in that segment; in the future we will have four.”

He declined to specify which models would be cut. Entry-level vehicles at Mercedes include the A-Class sedan, CLA coupe, and GLA SUV.

Instead, the brand will increase by 60% the sales share of its top-end vehicles by 2026. That group includes sales of the S-Class, Mercedes-AMG, Maybach, and G-Wagen lines.

The strategy is key to maintaining the current strong level of Ebit margins, says Michael Dean, a senior automotive analyst for Bloomberg Intelligence. During the day with investors May 19, the company announced a modest uplift of Ebit margin targets to 14% by 2025, versus 12.7% in 2021. But even with some improvement, it would still be disappointing compared to competitors.

“The decision by Mercedes to drop some low-end models is welcomed,” Dean says. “However it’s a moot point whether they will gain credit by investors for the decision, if BMW or Audi does not follow suit.”

Prior to its semi-annual investor day also held in Monaco, the brand unveiled examples of its high-end vehicles that would place it closer to competitors like Bentley and Rolls-Royce. A highly bespoke concept called the Mercedes-Maybach Haute Voiture, a play on the term haute couture using the French word for car, and a limited-to-150 edition Mercedes-Maybach S680 S-Class V12 designed by Virgil Abloh were two examples shown of what Mercedes will focus on more in the future. A spokesperson for the brand declined to specify pricing on the vehicles.

The plan to focus more on vehicles with higher profit margins comes at a time when the brand, along with rivals like BMW, had already increased pricing due to substantial market complications. Global semiconductor shortages, the war in Ukraine, and extensive pandemic-related shutdowns in China have caused supply chain issues, production delays, and high pricing at dealerships for virtually every luxury automaker.

The possibility of gas rationing in Germany is another recent challenge the company is evaluating on a daily basis, Källenius said.

“We are in a perpetual taskforce mode,” he said. “We are not rattled per se, as a system, but of course it has an effect. It further complicates our overall environment.”

The first non-German head of the 120-plus-year-old brand, the Swede said the company had already started to build its new strategy prior to the current headwinds and would continue with the plan after the market normalizes. In the first quarter of this year, Mercedes sold 10% fewer vehicles compared to last year but saw profits surge by 20%.

“At some point, we will come out of this, and we will have restrictions lifted,” he said. “But we are committed to stick with this discipline.”