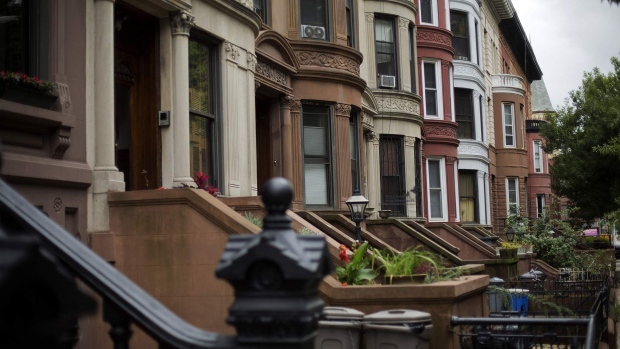 Brownstone buildings line a street of the Bedford-Stuyvesant neighborhood in the Brooklyn borough of New York, U.S., on Wednesday Aug. 13, 2014. CityShares, which enables participants to reap rewards from increasing apartment demand in gentrifying areas, is targeting properties in Brooklyn\'s Bedford-Stuyvesant for some of it\'s first investments. Photographer: Bloomberg/Bloomberg , Photographer: Victor J. Blue/Bloomberg

Just a few years ago, the millennial generation -- generally defined as those born from the early 1980s through the mid-1990s -- was synonymous with youthful rebellion. But now, as the millennials ease into early middle age, they’re finding their path out of their parents’ basement to be a lot harder than it was for earlier generations.

The fundamental problem is that millennials aren’t building wealth. The wealth of the median household headed by someone 35 or younger has actually shrunk in inflation-adjusted terms since the mid-2000s, even as the wealth of older Americans has continued to grow:

A recent analysis by the Center for Household Financial Stability at the Federal Reserve Bank of St. Louis found that millennials have 34 per cent less wealth than would have been predicted from the experience of earlier generations. The gap is much larger for those without a bachelor’s degree.

Many analysts have zeroed in on housing as the reason millennials have failed to match their predecessors. As of 2019, millennials owned only five per cent of the U.S. housing stock, compared with 15 per cent for the previous generation at the same age. The homeownership rate for households headed by Americans younger than 35 was 43 per cent in 2005, but only 31 per cent in 2015. Instead of accumulating mortgage debt like their predecessors, they’ve racked up student loans and consumer debt.

Of course, millennials will eventually inherit their baby boomer parents’ wealth, including houses. But much of this transfer won't happen for another decade or two, meaning that many millennials will pass through their prime family-forming years without the stability and life options that wealth and homeownership provide. That is already weighing on fertility rates, exacerbating the problem of population aging. Furthermore, inherited wealth will perpetuate stark racial disparities, with Black and Hispanic millennials receiving little compared to their White peers.

A large fraction of millennials are thus on track to be a sad and lost generation, too old for the young rebellious independent bohemian life, but too poor and indebted to move to the suburbs and start families. The U.S. government needs to think about policies to prevent this from happening.

The most obvious policy is to cancel some of the existing stock of student-loan debt -- most of which is owned by the federal government -- and to switch to an income-based repayment model for future student loans. But this will primarily help educated millennials, who are not as far behind in terms of wealth-building as those without a bachelor’s degree. Another option is to implement wealth taxes and hand the money out as basic income. But income takes a long time to turn into wealth, even if the recipients save much of what they get.

The best method for building broad-based middle-class wealth is still homeownership. Houses are a physical, tangible asset that people of all walks of life can understand and feel confident in. Unlike other forms of wealth, a mortgage also nudges people toward saving more of their income. This is probably why the middle class tends to hold most of its wealth in houses.

The U.S. used to facilitate mass wealth-building via homeownership. The GI Bill helped WW II veterans buy homes en masse, and the expansion of the suburbs gave them and the boomers who followed plenty of new homes to buy. But those homes have appreciated in price and nationwide construction has stalled, leaving many millennials priced out of the market amid a slow-growing stock of housing. Today, U.S. housing, rather than a driver of wealth accumulation, has become an engine of intergenerational inequality.

Some countries have done a better job than the U.S. of using housing to build and transfer wealth across generations. One of these is Singapore. Although most of Singapore’s housing is government-built and is technically government-owned, the government allows occupants to buy and sell 99-year leases that essentially function as title deeds. Homeownership, therefore, is near-universal. The government also gives out subsidies to help young families buy starter homes. Because the government manages the supply of new homes, it can ensure that young people earn a decent return by the time they retire.

The U.S. could adapt this system to promote mass homeownership and wealth creation for millennials and later generations. The government could build and sell new housing, especially in inner-ring suburbs, potentially using eminent domain to keep construction costs low. Young people -- especially young families -- could get down-payment assistance to buy their first home. By carefully managing the amount of new housing construction, the government could make sure that home prices appreciated enough to provide people with a decent return over their lifetime, but not too much to price younger people out of the market.

Each generation would thus get to enjoy what the WW II generation and boomers enjoyed -- the security and personal freedom of owning a home at a young age, coupled with the knowledge that their wealth would appreciate over time. And because down-payment assistance would be funded by progressive taxation, the system would redistribute wealth to those who weren’t born with rich parents.

The alternative -- letting young Americans reach middle age without a stake in the U.S. economic system -- is both sad and frightening to contemplate because it could lead not just to ennui but to unrest. A housing system built loosely on the Singaporean model would allow today’s young people to enjoy the same life progression as their parents and grandparents, preserving the American dream in perpetuity.