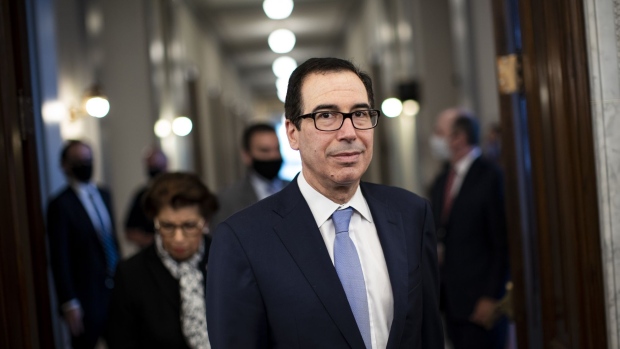 U.S. Treasury Secretary Steven Mnuchin said Monday the next round of virus relief will center on measures to get children returned to schools and workers back into jobs, as well as developing a vaccine to blunt the pandemic.

Mnuchin and President Donald Trump met at the White House with Senate Majority Leader Mitch McConnell and House Minority Leader Kevin McCarthy to hammer out the Republican plan amid firm opposition from Democrats, who say the GOP is tilting aid toward businesses instead of people struggling with the expanding pandemic.

The White House and Congress have only a few weeks to come up another stimulus to prevent the economic rout caused by the coronavirus from deepening. The US$2.9 trillion flood of federal money that’s been supporting the economy through the pandemic is about to dry up as the outbreak is surging across the country, hobbling attempts to reopen the economy.

The focus of the next phase of relief will be “kids and jobs and vaccines,” Mnuchin, who’ll have a central role in negotiations, told reporters. Along with money still untapped from earlier rounds of stimulus, Republicans are “starting with another trillion dollars. We think that will make a big impact.”

In addition to opposition from Democrats, who’ve proposed a US$3.5 trillion stimulus, Republicans will have to overcome some internal divisions over what to include.

McCarthy told reporters at the Capitol that initial GOP proposal would include cutting the payroll tax. That’s been a central demand of Trump and a source of tension between the White House and some Senate Republicans, who don’t view it as a priority. A spokesman for Senate Finance Chairman Chuck Grassley, Michael Zona, said the inclusion of a payroll tax cut or suspension hasn’t been finalized.

Another potential hurdle is that Mnuchin was balking over the weekend at a US$25 billion initiative favored by Senate Republicans to help states with coronavirus testing and contact tracing, according to a person familiar with the negotiations.

The GOP legislation will include several tax credits to help companies that are re-opening after a prolonged shutdown, according to Mnuchin. That includes an expanded employee retention tax credit that was in the stimulus bill passed in March, which gives companies a tax break for keeping employees on payroll. The proposal also will include tax credits for personal protective equipment, workplace cleaning and testing.

Republicans also want to include money to help schools make modifications or pay for equipment needed to re-open classrooms in the fall. The GOP bill likely will include about US$105 billion for education, according to an aide familiar with the emerging plan.

Mnuchin said the unemployment-insurance program needed a “technical fix.” McCarthy said the US$600 supplemental payments were a disincentive to work because some people got more in unemployment benefits than they were making at their jobs. He said there are ways to make sure the benefits aren’t more than a worker’s wages.

The Republican plan to be drafted this week is already facing opposition from Democrats, whose votes will be needed to get any stimulus legislation through Congress. Democrats have sought nearly US$1 trillion for states and localities that face revenue shortfalls. The GOP is said to favor an alternate proposal to allow states flexibility in using US$150 billion already allocated them in a previous bill.

McConnell’s support for shielding companies that reopen against coronavirus-related lawsuits could “grant legal immunity to negligent corporations, nursing homes or others,” Senate Democratic leader Chuck Schumer wrote in a letter to Democrats sent just before the White House meeting.

Schumer said Democrats must stick together, as they did when the last relief package passed in March.

“It was our unity against a partisan, Republican first draft that allowed for significant improvements to be made,” Schumer wrote. “I hope we will not have to repeat that process. But we will stand together again if we must.

McConnell has said he would begin negotiations with Democrats for a final measure once the Republican plan is complete. Mnuchin and White House Chief of Staff Mark Meadows will meet with GOP senators at their weekly luncheon on Tuesday and will begin reaching out to Democrats.