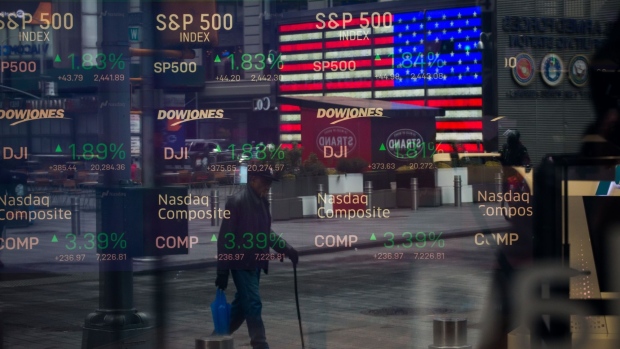 Monitors displaying stock market information are seen through the window of the Nasdaq MarketSite in the Times Square neighborhood of New York, U.S., on Thursday, March 19, 2020. New York state Governor Andrew Cuomo on Thursday ordered businesses to keep 75% of their workforce home as the number of coronavirus cases rises rapidly. , Bloomberg

The tech-led selloff in U.S. equities is likely only halfway done, according to the Morgan Stanley strategist whose warning last month about the top-heavy market now appears prescient.

Down 13 per cent from its Sept. 2 high, the Nasdaq 100 has tumbled below its 50-day average and is underperforming the S&P 500 for the first time in a year. Yet deeper losses may be ahead because the selloff has yet to clear out the positive sentiment that bubbled up in the past few months during its historic rally, according to Mike Wilson, the bank’s chief U.S. equity strategist.

The tech-heavy gauge is at risk of falling to its 200-day average, according to the strategist. That level, which sits near 9,528, would be a 12 per cent drop from current levels and a 23 per cent decline from its all-time high of 12,421 reached earlier this month.

“This is what happens when stocks get so extended -- corrections can be much bigger when remaining in an uptrend,” Wilson wrote in a note to clients.

The Nasdaq 100 extended a three-week rout, falling as much as 2.4 per cent as of 1:40 p.m. in New York. The biggest ETF tracking the index lost money as the fastest rate since 2000 on Friday, while large speculators boosted the net bearish positions in Nasdaq futures to a 12-year high.

But to Wilson, excessive bullishness toward tech stocks has yet to be completely washed out. Just consider: Despite the worst drawdown in months, open interest on bullish call options remained elevated for tech giants such as Apple Inc. and Facebook Inc. A flurry of software companies soared in their recent trading debuts, with Snowflake Inc. more than doubling on its first day. 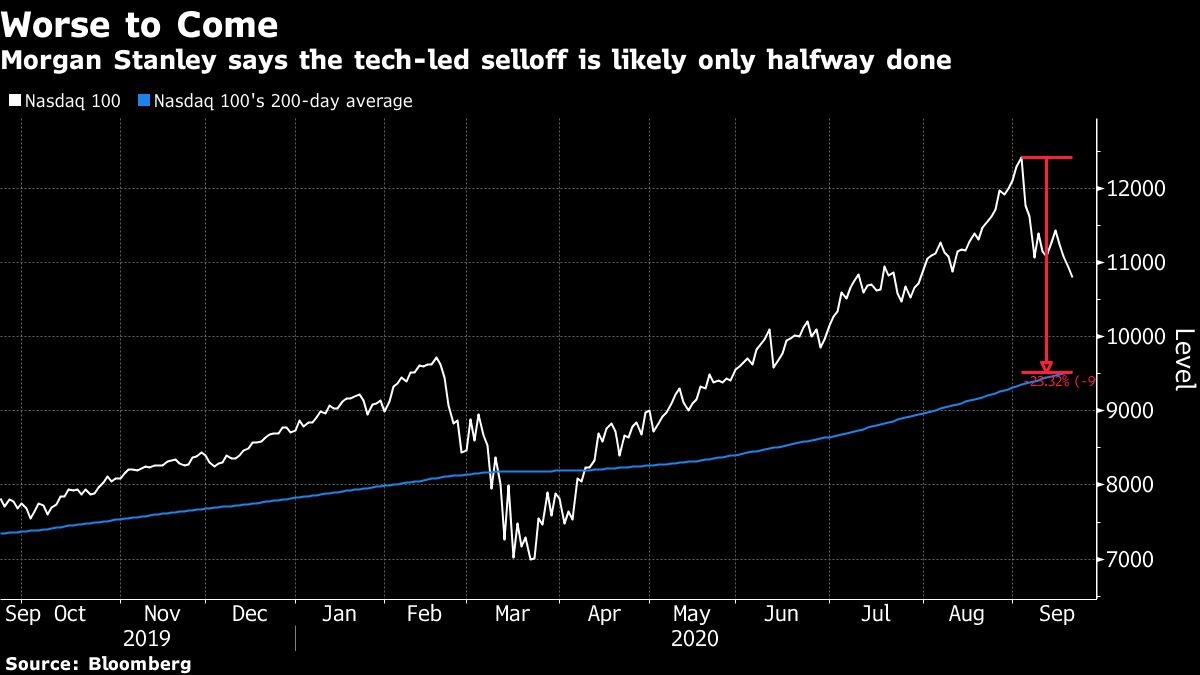 More importantly, hedge funds have stayed “decidedly” long tech and growth stocks, Wilson said, citing the firm’s prime brokerage data. While the conviction partly reflects the outsize returns from internet and software companies, it also highlights the danger should sentiment start to sour, he said. Despite this month’s retreat, the Nasdaq 100 is up 24 per cent for the year, compared with a gain of less than 1 per cent for the S&P 500.

Many of those funds “are letting it ride,” Wilson wrote. “That may come into play and provide some fuel for this correction to go a little further than most are expecting.”