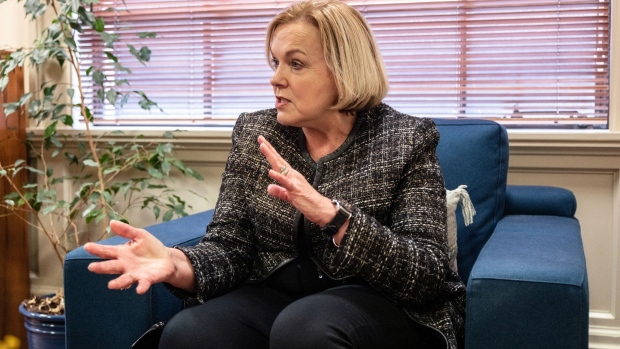 (Bloomberg) -- New Zealand’s main opposition National Party has been thrown into turmoil and may change its leader again, continuing a period of instability that has helped boost support for Prime Minister Jacinda Ardern’s governing Labour Party.

Current National Party leader Judith Collins demoted former leader Simon Bridges and relieved him of all his shadow portfolios late Wednesday, citing his alleged “harassment and intimidation” of a female colleague a number of years ago. Bridges on Thursday morning dubbed the move “desperate” and said Collins would “go to any length to hold on to her leadership.”

The stoush sets the scene for a possible vote on the leadership by National’s caucus today, continuing ructions at the top of the party dating back to the ousting of Bridges from the leadership in May last year. He was rolled by Todd Muller, who held the position for less than two months before Collins took over in July 2020.

National suffered a heavy defeat in the 2020 election and has continued to poll poorly under Collins. That has prompted speculation that Bridges would try to reclaim the leadership at some stage before the next election, due in 2023.

In a statement late Wednesday, Collins said she had been made aware of a serious complaint against Bridges that demanded a swift and decisive response.

“The case relates to comments made by Mr Bridges to a female caucus colleague at a function a number of years ago,” Collins said. “Having been made aware of the seriousness of the complaint for the first time and the ongoing distress this has caused the complainant, I was left with no option but to immediately demote Simon Bridges and relieve him of his portfolio responsibilities.”

“Under my leadership, the National Party will not tolerate harassment and intimidation of any person,” she said.