Oil jumped the most this year as attacks by Iran and its proxies in the sky and on sea and land prompted U.S. President Donald Trump to warn the Islamic Republic it made “a very big mistake.”

Futures climbed as much as 6.1 per cent in New York on Thursday after Iran shot down an American dronejust a week after two tankers were targeted in the region. Meanwhile, Iran-backed Houthi rebels in Yemen said they hit a Saudi Arabian power plant with a cruise missile, at least the third such attack on the kingdom’s infrastructure in a week.

Trump appeared to downplay the Iranian drone downing, saying a “loose and stupid” individual -- rather than Iran’s top leaders -- may have been culpable.

Crude was also boosted by a rally for equities after the U.S. Federal Reserve signaled it’s ready to lower interest rates for the first time since 2008. 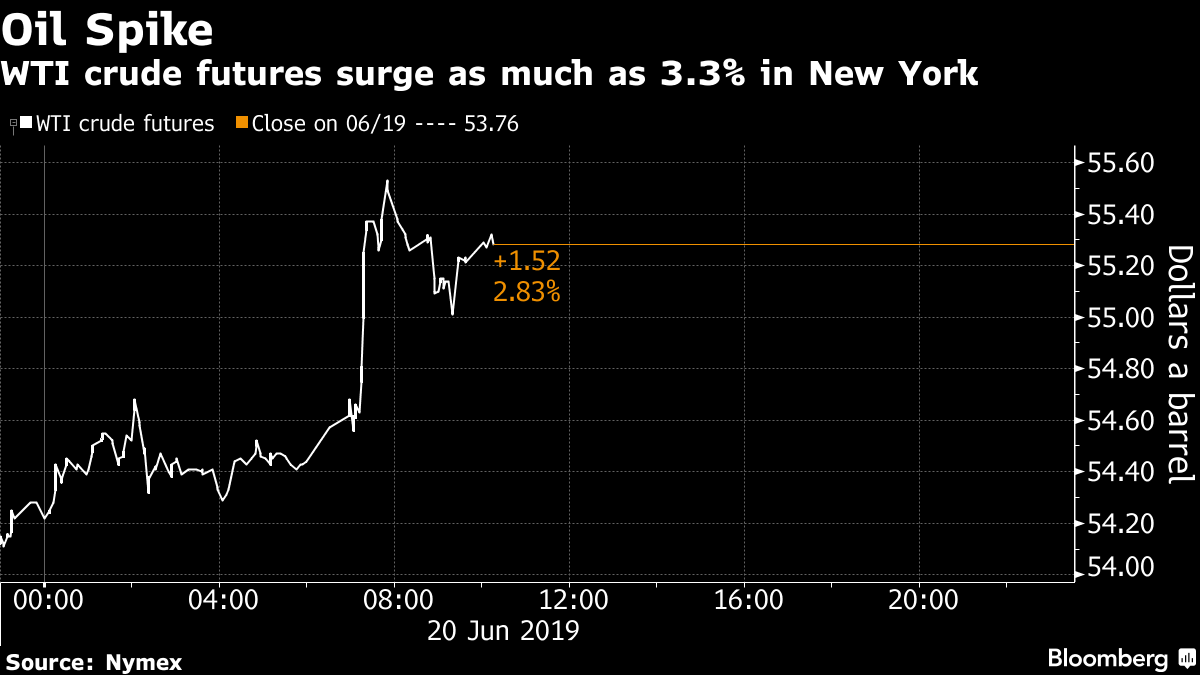 After slipping into a bear market earlier this month, U.S. oil futures have surged more than 10 per cent since the middle of last week, as America and Saudi Arabia blamed Iran for a spate of attacks while the Trump administration tightens sanctions on the OPEC member. Word that Trump and Chinese President Xi Jinping are set to resume trade talks at the G-20 summit in Japan have also brightened sentiments about global growth.

“The Iran conflict isn’t going away any time soon,” said Michael Hiley, head of over-the-counter energy trading at LPS Futures in New York. “If you combine that with Trump and Xi making nice -- they are at least saying the right things -- then that’s certainly going to prop up” the oil market.

West Texas Intermediate for July delivery, which expires Thursday, rose as high as US$57.02 a barrel on the New York Mercantile Exchange, for its biggest intraday increase since Dec. 26. It was at US$56.75 as of 2:11 p.m.

Brent for August settlement rose as much as 4.9 per cent to US$64.82 on London’s ICE Futures Europe Exchange. The global benchmark crude traded at a US$7.40 premium to WTI for the same month.

Iran said the craft it shot down was spying and stated it would defend its airspace and maritime boundaries “with all our might.” The U.S. said the Global Hawk drone was in international airspace when it was hit by an Iranian missile over the Strait of Hormuz, one of the world’s most critical chokepoints for oil shipments.

Speculative traders who’d turned against crude recently are ready to pile back in, said LPS’s Hiley. “Certainly there are some buying bullets out there; there’s some dry powder,” he said. “You can’t be short in this market.”