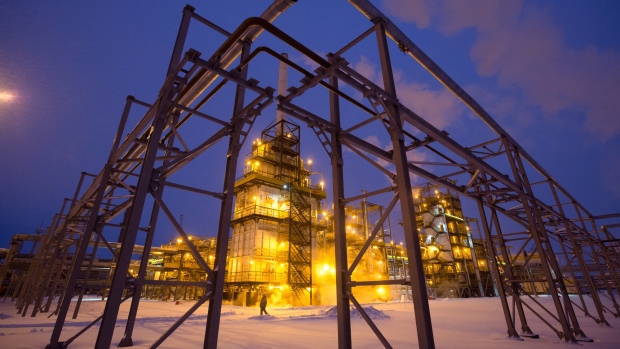 OPEC said that international trade tensions are hurting demand for oil, slashing its estimates for consumption earlier in the year and predicting further challenges ahead.

The organization, due to meet in the coming weeks to set production levels for the second half, said demand increased by less than 1 million barrels a day in the first quarter after cutting its assessment by more than 20 per cent. The world economy is headed for its weakest growth in a decade, buffeted by a prolonged tariff battle between the U.S. and China.

“Throughout the first half of this year, ongoing global trade tensions have escalated,” resulting in “weaker growth in global oil demand,” the cartel’s Vienna-based secretariat said in its monthly report. “The observed slowdown in the global economy in the first half will be further challenged in the second half.”

Oil prices slumped into a bear market last week, sinking below US$60 a barrel in London for the first time since January, on concerns that faltering demand would lead to a crude surplus even as the Organization of Petroleum Exporting Countries and its allies keep supply in check. Prices surged 3 per cent today on suspected attacks on oil tankers in the Persian Gulf.

Although OPEC reduced demand estimates for the first quarter, it kept forecasts for 2019 as a whole mostly unchanged and projects that consumption growth will accelerate during the rest of the year. World demand will rise by 1.14 million barrels a day, or 1.2 per cent, on average this year, down from an estimate of 1.21 million a day in last month’s report.

As a result, the report signaled that if OPEC maintains production at current levels then global markets should tighten significantly during the third quarter, by about 1.3 million barrels a day. Output from its 14 members fell by 236,000 barrels a day to 29.9 million a day last month as the U.S. tightened its squeeze on Iranian exports, it said.

Nonetheless, as OPEC and its partners prepare to meet in Vienna, its members appear focused on continuing to restrict supplies.

Saudi Arabian Energy Minister Khalid Al-Falih said in St. Petersburg last week that the organization is aligned on maintaining its output curbs during the rest of 2019, and awaits only a similar commitment from its ally, Russia.

As the booming American shale industry propels U.S. production to new records, United Arab Emirates Energy Minister Suhail Al Mazrouei even indicated that OPEC may also need to constrain supply in 2020. The cartel pumps about 40 per cent of the world’s oil.

Although the policy decision looks straightforward when OPEC and its partners convene, the producers are still struggling with one issue. As the tensions between Saudi Arabia and Iran continue to heat up, members are bickering over exactly which date to meet.