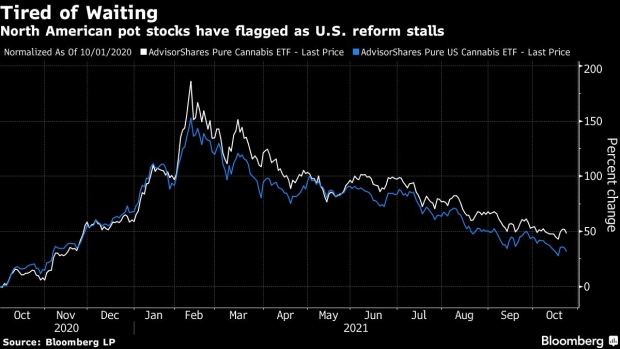 (Bloomberg) -- Cannabis executives and investors are staying bullish -- even as fading optimism about quick federal reform has weighed on stocks.

This was the central topic of discussion at two recent events: MJBizCon in Las Vegas and Trailblazers Ojai 21 in California. After spiking in January and February when the new Democratic administration spurred hopes that an overhaul was imminent, Canadian and U.S. stocks are returning to levels seen in the fall of 2020.

“There were a lot of opinions, including the notion that the U.S. federal government was overestimated coming into the year,” said Todd Harrison, founding partner of CB1 Capital Management and an organizer of the Ojai event.

Dan Ahrens, chief operating officer and a portfolio manager at AdvisorShares, who also attended the conference in Ojai, pointed to politics as well. “The main instigator for the market is the politicians that ran last fall promised certain amounts of reform, and it hasn’t happened,” he told me. “It’s being dragged out longer than anybody thought it would.”

He sees the current situation as a buying opportunity. “Cannabis companies in the U.S. still have fantastic revenue growth and with this eight-month downturn, there are companies now trading for the value of the cash they have on their books,” Ahrens said.

Harrison also sees stocks as divorced from company fundamentals. “Credit is getting better while stock prices are getting worse? It’s just untenable,” he said, calling improved lending rates rates to cannabis companies another reason why the stock rut is likely to end soon.

There are different routes that U.S. legalization could take. One is the SAFE Banking Act. It initially seemed to be the most likely reform to pass this year, but the act has been held up over concerns that it’s too narrow and financially focused. The Cannabis Administration and Opportunity Act, a more sweeping reform that includes provisions to help communities and individuals harmed by the war on drugs, has a longer path to approval but is favored by some due to its broader reach.

“I won’t say when, but I think it will happen sooner than most people think it will,” Klein said in a phone interview after the deal was announced. He said Canopy may be interested in even further investment in U.S. brands.

If the U.S. does decriminalize marijuana, many say it will bring more than just the obvious boost of a bigger consumer market for companies to go after. They predict new financial benefits that will materialize once the stigma of illegality fades.

Brian McKenna, a vice president at JMP Group who follows cannabis, said issues weighing on the stocks at the moment include a lack of large institutional investors, the difficulty some companies still have raising debt, and the fact that they aren’t listed on major U.S. stock exchanges. “Right now, it’s an extremely inefficient market,” he said.

Harrison of CB1 Capital Management noted that there were eight analysts from investment banks at the Ojai conference, a sign that the financial world is “building the plumbing for a Wall Street relationship.”

While there was some teeth-gnashing over stock prices, Harrison said the conferences were ultimately validating.

“The psychology was positive,” he said. “It was very different than the past year of sitting behind a desk, reading Twitter, and watching stock prices go down.”

“The longer federal reform takes, the better for the MSOs,” Cantor analyst Pablo Zuanic wrote in an Oct. 22 research note. Delays will mean that U.S. multi-state operators benefit from more institutional investors, more access to credit, and the ability to buy-up smaller companies, he said.