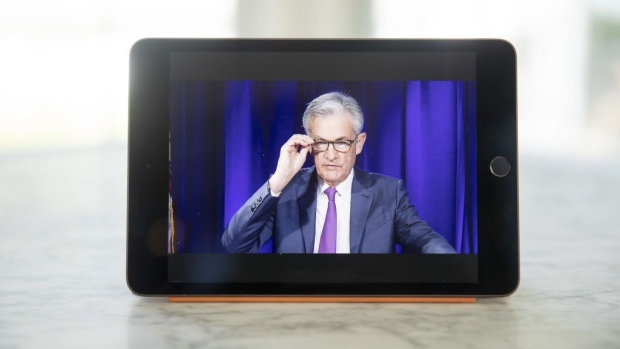 Jerome Powell, chairman of the U.S. Federal Reserve, speaks during a virtual news conference seen on a tablet computer in Tiskilwa, Illinois, U.S., on Wednesday, Sept. 16, 2020. The Federal Reserve left interest rates near zero and signaled it would hold them there through at least 2023 to help the U.S. economy recover from the coronavirus pandemic. , Photographer: Bloomberg/Bloomberg

Federal Reserve Chairman Jerome Powell has made his first policy announcement since unveiling the central bank’s new monetary strategy in August. Financial markets have plenty of questions about the plan, but Powell on Wednesday provided no further answers, except to keep saying it would be “very powerful.”

That’s certainly questionable — but the fault isn’t Powell’s. With interest rates close to zero, there’s only so much the Fed can do, and only so much the chairman can do to pretend otherwise.

The new strategy aims, in effect, to convince investors that the central bank will hold interest rates at zero for longer than it would have under the old approach, allowing inflation to rise above its long-term 2 per cent target, even with the economy at full employment and following years of steady expansion. Building that expectation into investors’ economic forecasts would indeed provide some additional monetary stimulus.

Yet the Fed won’t say how far above 2 per cent it would let inflation rise, or for how long. In a sense, that’s understandable. It can’t let anybody suspect that it no longer takes its long-term target seriously, and policy makers want to retain the discretion to deal with unforeseen circumstances. The problem is, it’s hard to keep this room for maneuver and make firm promises at the same time. For the policy to be “very powerful,” it has to be both understood and believed.

The Fed’s new economic-policy projections, released alongside the announcement, might have shed some light — but, as it turns out, they don’t. They show inflation rising slowly to 2 per cent by the end of 2023, with unemployment at 4 per cent (a shade below the estimated longer-term rate, suggesting higher than “full employment”), and interest rates still at zero. The test of the new approach is how much longer the Fed would keep rates there, with its dual mandate accomplished, if inflation kept going up. The projections give no indication. The Fed is silent about what might happen between 2023 and an unspecified “longer run” that shows inflation at 2 per cent and interest rates comfortably back at 2.5 per cent.

In truth, the projections also gloss over far greater uncertainties — concerning the course of the pandemic, any lasting structural harm to the economy and above all the outlook for fiscal policy. The Fed’s policy makers are presumably betting that there’ll be further fiscal stimulus at some point, and this assumption is implicitly embedded in their respective projections. But the stalemate in Washington and the impending elections mean that the scale and timing of additional budget support are anybody’s guess.

The Fed is paying the price of being competent. It adjusts the limited policy instruments at its disposal skillfully and deliberately, striving at every point to explain what it’s doing. Congress and the administration have at their command the far more potent tool of fiscal policy — under current conditions, changes in public spending really would be “very powerful” — but can’t manage to discuss it intelligently, much less wield it effectively. As a result, the central bank is left to do everything.

Whatever the Fed’s new strategy turns out to mean, U.S. economic policy is falling short. The longer the country’s political paralysis goes on, the more obvious the limits of monetary policy will become.