Markets are dependent on rhetoric out of Jackson Hole: Trader

Federal Reserve Chairman Jerome Powell will have no lack of material to choose from when he kicks off the central bank’s annual Jackson Hole symposium Friday with a speech on the challenges for monetary policy.

A deglobalization shock touched off by Donald Trump’s trade policy; super low interest rates, including US$16.7 trillion in negative-yielding bonds; a never-ending presidential assault on the Fed; and a rising risk of a U.S. and worldwide recession.

“There are all sorts of hazards out there,’’ said former International Monetary Fund chief economist Maury Obstfeld, now a senior fellow at the Peterson Institute for International Economics. 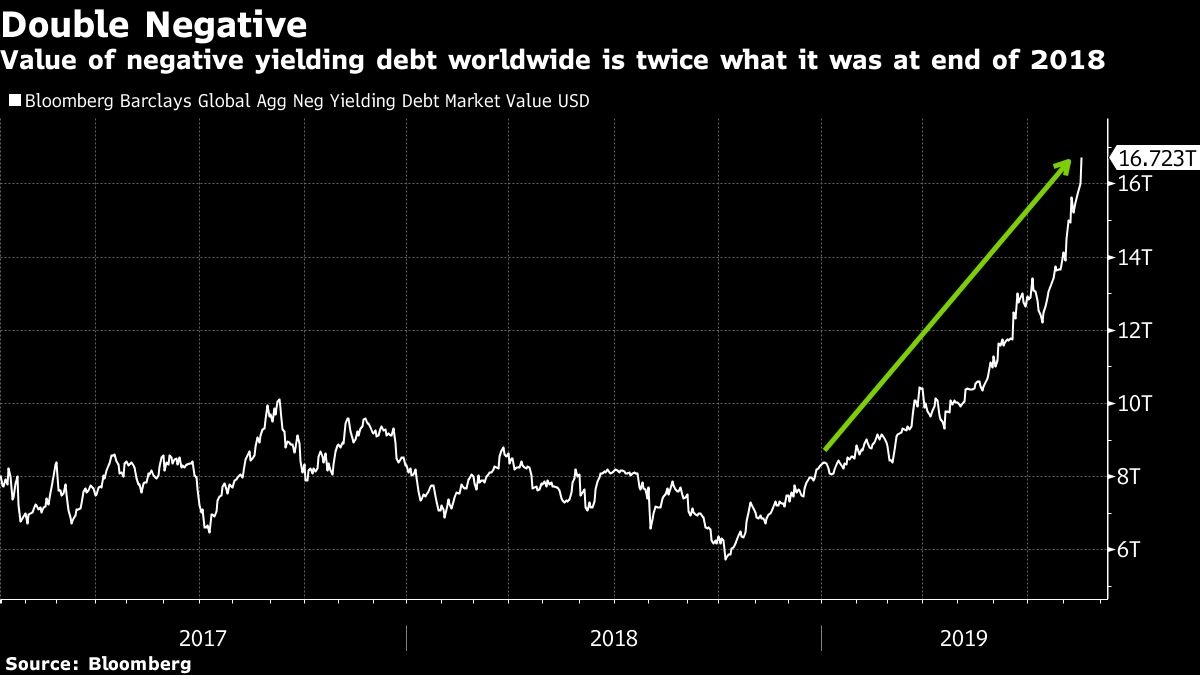 And some of them, including the risk of a hard Brexit and political protests in Hong Kong, lie outside of the U.S. and aren’t susceptible to the Fed’s influence.

Fed watchers expect Powell to do nothing on Friday to disabuse investors of the widespread perception that the central bank will reduce interest rates by another quarter of a percentage point next month. But whether he’ll open the door to a half-point cut, which some traders are looking for, is unclear.

“It’s certainly a possibility,’’ that the Fed will lower rates by a half point in September, said Bruce Kasman, chief economist at JPMorgan Chase & Co. “But I don’t see it. The data don’t justify that.’’

Former Fed official Nathan Sheets likened the economic dashboard facing Powell to a Christmas tree. Some lights, such as the steep drop in bond yields, are flashing recession red. Others, such as solid retail sales, are flashing a green all-clear or at worst a cautionary yellow.

Powell described the Fed’s policy path as a “mid-cycle adjustment” on July 31 after it cut rates for the first time in a decade. Sheets, who sees one or two more rate cuts, said he’d be fine with Powell repeating that description but he doubted investors would be.

The Fed chair though will want to avoid feeding the pessimism in the financial markets and seeing it spread more broadly, said Sheets, who is now chief economist for PGIM Fixed Income.

“We have nothing to fear about a recession right now except for the fear of recession,’’ Bank of America Corp. Chief Executive Officer Brian Moynihan told Bloomberg Television on Aug. 16.

If it cuts rates when the domestic economy is doing all right, it will be accused of caving in to pressure from Trump and Wall Street. If it stands pat, it risks triggering a financial-market disruption that could damage the economy.

On top of that, investors are increasingly questioning the ability of central banks to spur their economies after a decade of sub-par and not inclusive-enough inclusive growth in which monetary policy makers played an over-arching role, El-Erian said.

“What’s going on in the global economy is way beyond the Fed, way beyond trade,’’ said El-Erian, who is a Bloomberg Opinion columnist. “It’s all part of a much deeper malaise.’’ 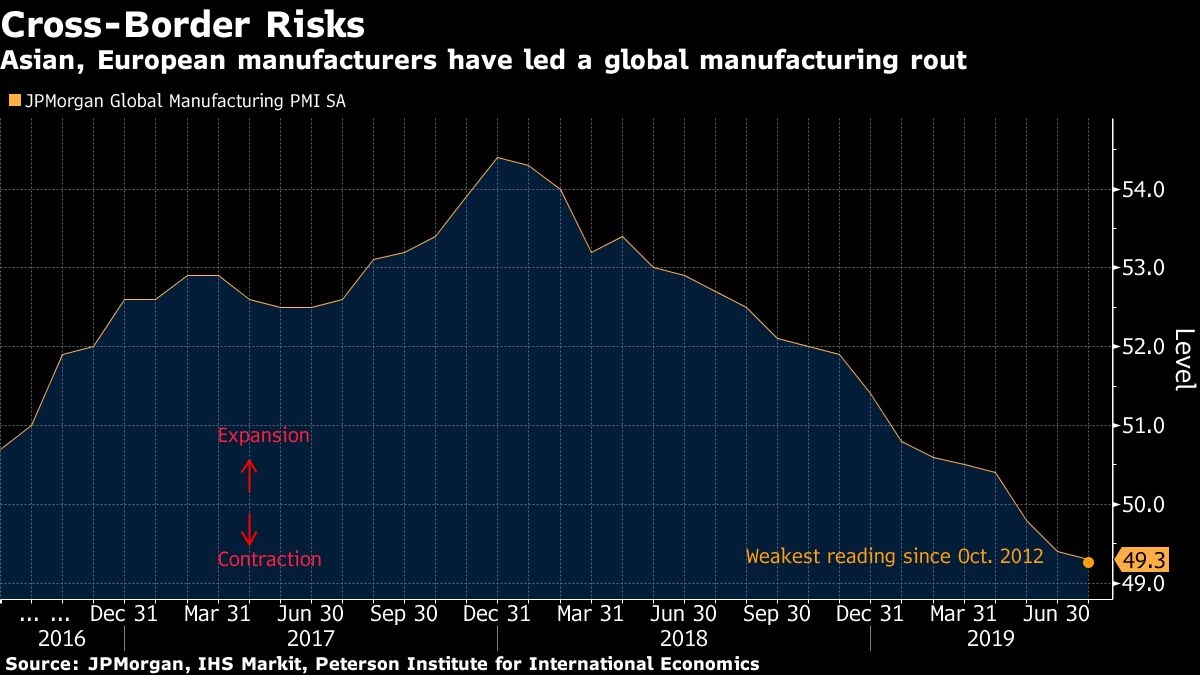 It’s the deglobalization shock though that’s got the markets -- and the Fed’s -- attention. The trouble, as Powell himself has noted, is that the central bank doesn’t have a lot of experience in dealing with worldwide trade tensions.

“It’s something that we haven’t faced before and that we’re learning by doing,’’ he told reporters last month.

While the direct effects of tariffs are not large, what’s key is the impact that the policies have on business confidence and financial markets, he said.

And they can change quickly in response to the latest Trump tweet.

Obstfeld likened today’s situation to 1971, when then President Richard Nixon imposed a 10 per cent surcharge on all dutiable imports to force other countries to revalue their currencies. At the same time, Nixon was pressuring the Fed to keep money easy to aid his 1972 re-election bid.

The moves helped pave the way for the subsequent collapse of the Bretton Woods currency system.

Now, “we are seeing a breakdown in the global trading regime,’’ Obstfeld said.

In recent decades, recessions have usually started in the U.S. and spread to the rest of the world. The danger today is that the reverse could happen.

“It’s kind of a unique situation,’’ JPMorgan’s Kasman said. “The risk is that the rest of the world gets weak enough, gets stressed enough that it spills over into the U.S.’’

China has reported the slowest growth in industrial output since 2002, while Germany’s economy shrank as exports slumped. An upcoming risk is Brexit as U.K. Prime Minister Boris Johnson has pledged to take Britain out of the European Union on Oct. 31.

Powell is likely to focus on the divergence of monetary policy paths across countries and the implications for capital markets. However, his speech will be scrutinized for clues as to whether policy makers are reconsidering their course for “insurance” rate cuts to become a full easing cycle.
--Yelena Shulyatyeva and Eliza Winger

The U.S. economy is relatively self-contained: Exports last year totaled 12 per cent of gross domestic product. But America’s financial markets are more exposed. U.S. companies in the S&P 500 Index obtain more than 40 per cent of their sales from outside the country.

Many of the biggest investors in the U.S. government debt market reside abroad. And they’re pouring money into Treasuries to take advantage of yields that are still positive.

“The whole question of how big are the external risks, and how much does that really matter for the U.S., is a central issue in the policy debate at the moment,’’ said Lewis Alexander, chief U.S. economist at Nomura Securities International.

It’s one that’s likely to be front and center at Jackson Hole.

--With assistance from Vince Golle and Matthew Boesler