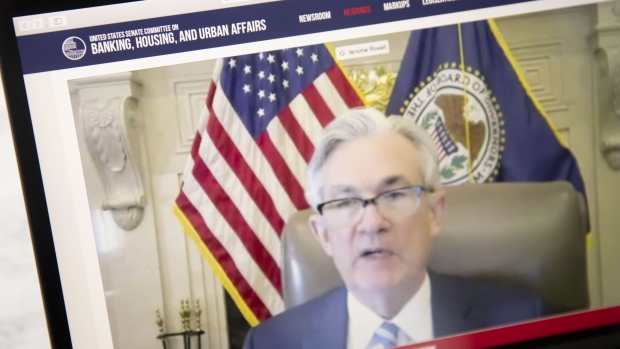 Jerome Powell, chairman of the U.S. Federal Reserve, speaks during a virtual Senate Banking Committee hearing seen on a laptop computer in Tiskilwa, Illinois, U.S., on Tuesday, May 19, 2020. Powell and Treasury Secretary Steven Mnuchin are testifying on the $2.2 trillion virus rescue package passed by the Congress in March. Photographer: Daniel Acker/Bloomberg , Bloomberg

Federal Reserve Chairman Jerome Powell defended aggressive action to shield the economy as the coronavirus pandemic took hold and said the central bank was “days” away from launching its Main Street Lending Program.

“We crossed a lot of red lines that had not been crossed before,” Powell said Friday during an online event hosted by Princeton University’s Griswold Center for Economic Policy Studies. “I’m very confident that this is the situation where you do that and then you figure it out.”

Powell’s remarks will probably be the last from a Fed policy maker before officials enter a blackout period at midnight Friday leading up to the June 9-10 meeting of the Federal Open Market Committee. Officials are widely expected to leave interest rates just above zero at that gathering and re-commit to using their full range of tools to support the U.S. economy during the coronavirus pandemic.

The Fed chair responded to questions about one of its most complex and riskiest programs intended to support the economy -- the Main Street facility -- which has been slow to launch. Powell said the central bank is “days away” from getting it up and running. The loan program is designed to help small and medium-sized businesses that don’t have access to public markets, he said.

“We do have this precious grant of independence,” Powell told session moderator Alan Blinder, a former Fed vice chair. “That really means that we need to stay in our lane and just do those things that Congress assigns us to do.”

Powell and his colleagues have warned the pandemic may leave deep and lasting scars on the economy even as the U.S. and other countries begin to emerge from lock-downs designed to limit the contagion.

More than 40 million U.S. workers have filed for unemployment benefits in the past 2-1/2 months as businesses shuttered and Americans stayed home. Data released earlier on Friday showed U.S. consumer spending, which accounts for about two-thirds of the world’s largest economy, plunged in April by the most on record.