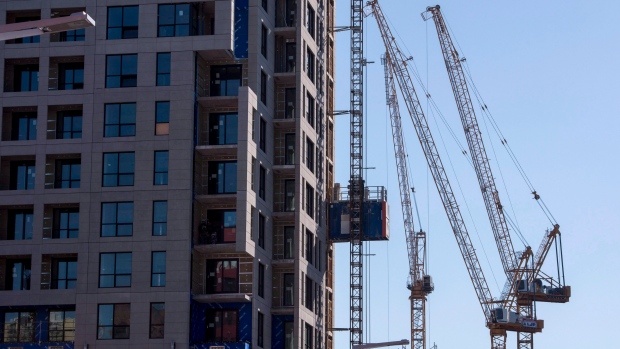 A construction site is seen Thursday, October 12, 2017 in Montreal. , THE CANADIAN PRESS/Paul Chiasson

For many prospective homebuyers who want something brand new or need more time to save money, preconstruction condominiums present a tempting opportunity.

But buying a preconstruction condo rather than an existing unit comes with risks, including the rare case of a builder scrapping the project entirely, and experts say there's no way for buyers to fully protect themselves from that worst-case scenario.

"That's sort of the nature of buying a condominium unit from plans," said Denise Lash, the founder of Lash Condo Law in Toronto. "With that comes the risk and there really isn't much you can do."

So far this year, two projects representing 239 condominium units in the Greater Toronto Area have been cancelled, according to data from Urbanation Inc. Between 2016 and 2018, builders scrapped plans for 6,729 units.

There are a number of reasons for which projects fail to materialize, wrote spokeswoman Pauline Lierman in an email, including financing, poor sales or a redesign, such as changing the product from condos to townhouses.

A new CIBC poll suggests millennials' homeownership ambitions are difficult to reconcile with their financial realities. Ninety-four per cent of respondents who currently rent or live at home said they intend to buy a home, yet 67 per cent have yet to start saving. CTV’s Chief Financial Commentator Pattie Lovett-Reid has more on the survey.

All sale agreements will have a built-in clause that allows a builder to cancel a project under certain circumstances, said Lash.

"They need to have a way out," she said if, for example, the bank suddenly refuses to lend the company the necessary funds. "That's just the way it is."

While purchasers would eventually have their deposits refunded, possibly with some interest, they would find themselves back in the hunt for a condo when prices may be higher and now unaffordable for them, she said.

Lawyer Lisa Laredo always tells her clients to research the builder first, adding most of the big builders that have been around for a long time tend to get the job done.

"Who are you buying it from and what is their track record?" said the real estate, wills and estate lawyer.

Prospective buyers should also look at the way the company will construct the building and unit, she said, including the materials they're using and if they're building to standard or above.

Lash suggests buyers hire a lawyer to look over the sale agreement to avoid some other risks of preconstruction condos.

Contracts may allow the builder to make sweeping changes, she said.

One client of hers purchased a unit that by move-in had been significantly altered. Changes included a balcony that faced the common outdoor area, a new location above the party room and a column in the middle of the living room, Lash said.

"It was all subject to change if you read the documents," she said.

It's possible to add some protections in, like restricting the ability for ceiling height in the unit to be reduced, Lash said.

Without a lawyer, buyers can also be hit with hefty closing fees, said Laredo, who has seen agreements that include $10,000 to $15,000 in additional costs at closing for things like installing meters or conducting the final inspection.

These aren't hidden costs if someone reads and understands the agreement, but otherwise can be an unwelcome surprise.

"That can be very difficult for a first-time buyer. All those amounts make a difference, especially if they're just trying to get into the market."

It's possible to have the builder agree to cap costs for certain or all categories, said Lash.

"Most projects that I've seen, there's some kind of negotiation on the added cost."