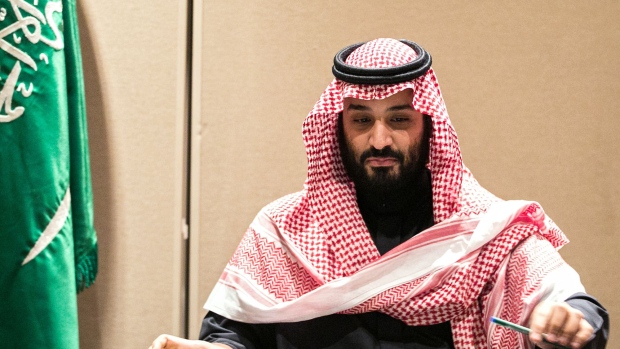 Mohammed bin Salman, Saudi Arabia's crown prince, puts down a pen after signing an agreement with SoftBank Group Corp. chairman Masayoshi Son, not pictured, in New York, U.S., on Tuesday, March 27, 2018. Saudi Arabia has signed a memorandum of understanding with SoftBank for a $200 billion solar power project in the kingdom, calling it the single largest of its kind in the world. , Bloomberg

“Climate change is an economic opportunity for individuals and the private sector,” Crown Prince Mohammed bin Salman said in Riyadh on Monday at a forum attended by several heads of state. Reducing emissions will “create jobs and strengthen creativity in the region.”

The kingdom will establish a fund to improve carbon-capture technology and back an initiative to develop clean fuels and provide food for hundreds of millions of people, Prince Mohammed said. The two initiatives will cost 39 billion riyals ($10.4 billion) and Saudi Arabia will contribute 15%.

On Saturday, the prince pledged that Saudi Arabia would eliminate greenhouse gas emissions within its borders by 2060. It marked a seismic shift for the world’s biggest oil exporter, though officials included plenty of caveats and emphasized that Saudi Arabia and others would need to pump crude for decades to come.

The new goal “is a major step forward,” U.S. President Joe Biden’s climate envoy, John Kerry, said. “It’s critical to have one of the world’s largest producers of fossil fuels step up at a moment when all countries, no matter their circumstances, need to come together.”